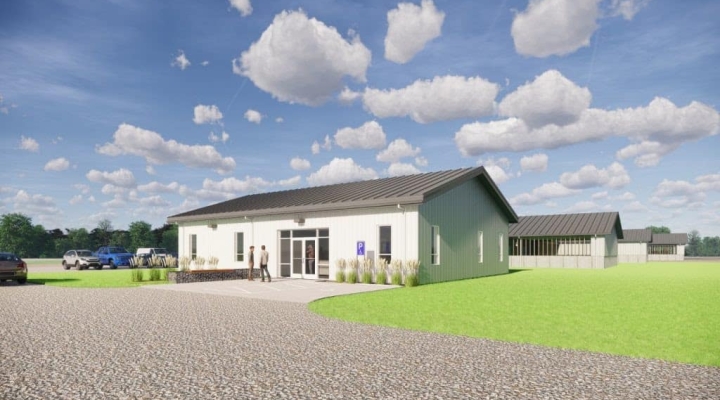 Virginia Tech’s College of Agriculture and Life Sciences recently finished $31 million of construction on a series of new and renovated buildings around its Blacksburg campus that helps cement the university’s role as a source of research, education, and outreach that serves the commonwealth’s largest private industry – agriculture. (photo by Virginia Tech University)

BLACKSBURG, Va. — Virginia Tech’s College of Agriculture and Life Sciences recently finished $31 million of construction on a series of new and renovated buildings around its Blacksburg campus that helps cement the university’s role as a source of research, education, and outreach that serves the commonwealth’s largest private industry – agriculture.

The buildings, which will help the livestock and poultry industries thrive, are part of the newly formed School of Animal Sciences, which merged the departments of Animal and Poultry Sciences and Dairy Science into one cohesive unit in order to strengthen their impact on the commonwealth, the nation, and the world.

“We are extremely grateful for the Commonwealth of Virginia’s support of Agency 229, which helps bolster some of the most vital industries in the state,” said Alan Grant, dean of the college who recently spoke before the Virginia Tech Board of Visitors about the construction updates.

The series of buildings have been under a multiphase construction project that includes a new swine research and education center and new buildings and upgraded facilities for the beef cattle and equine programs, among other things. A second phase of construction is underway to make other upgrades and refurbishments to other livestock buildings around campus.

The new state-of-the-art buildings will help maximize the impact of the new school, which is  one of the largest animal science programs east of the Mississippi. It is well positioned to build on its outstanding legacy and move even higher in the rankings with modern facilities, cutting-edge researchers, and a curriculum that prepares students for a wide array of jobs, not only in traditional agriculture and allied industries, but also in areas of medicine, veterinary sciences, biotechnology, and many other highly rewarding professions. Research conducted at these facilities supports the industry in Virginia and across the country.  In addition, these facilities provide excellent venues for hands-on, experiential learning.  Each year, dozens of students volunteer or are employed by the animal units in the school. These experiences are life-changing for a large proportion of these students and led to great career opportunities in the sector and beyond.

Some of the new buildings include:

These new additions add to a series of  projects in recent years that cement the university’s role in growing the agricultural industry, including a new Metabolic Research Laboratory and the William M. Etgen Large Animal Learning Center.