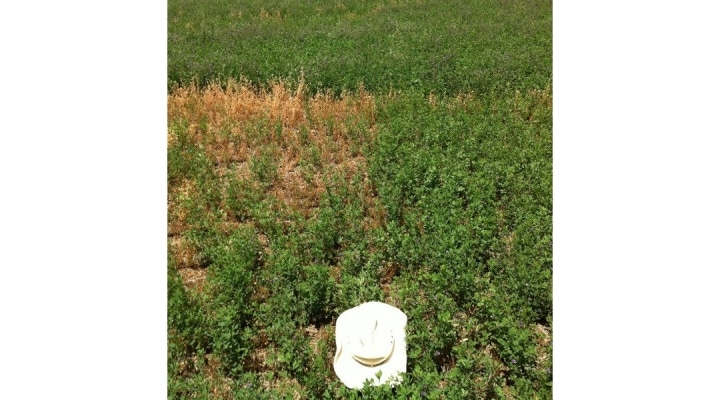 This alfalfa field shows the significant difference between the untreated left side and treated right side. (Texas A&M AgriLife photo by Dr David Drake)

COLLEGE STATION, Texas — This year, when alfalfa growers start seeing the menacing cotton root rot showing up in their fields, they can rest assured that almost 120 years after it was first characterized, Texas A&M AgriLife researchers have helped find a control for the fungus.

Although not large in acreage compared to row crops, Drake said alfalfa is grown throughout Texas and is especially important to the dairy and livestock industry. In 2019, the value of alfalfa in Texas was estimated at $100 million.

Topguard Terra was given a section 24 label by the Texas Department of Agriculture to control root rot in cotton in 2012 and has been used successfully since, Drake said. A 24C local-needs registration was also granted for use on grapes in 2015.

Now, finally, in 2020, a supplemental label has been granted for the use of Topguard Terra on alfalfa in eight states.

TRR in alfalfa results in low hay production and bare areas where weeds can grow and contaminate hay, Drake said.

“What makes it more devastating is that farmers invest hundreds of dollars in alfalfa seed expecting the field to last five or more years and TRR can wipe out large areas of a field in a single year,” he said.

In alfalfa, Topguard Terra is soil or stubble applied to protect plant roots. Drake’s research has shown good results with spring broadcast applications and between cutting applications as late as July.

“Earlier is better, as is the case with many soil-applied crop protection products that take irrigation or precipitation to be moved into the soil,” he said.

Drake said Topguard Terra should be applied to fields with a history of TRR in alfalfa, cotton or other crops. This disease tends to appear in the same areas year after year. Preventive treatments in areas known to have root rot will protect alfalfa stands. Annual treatments of already-diseased alfalfa fields will result in healthier plants and reduced spread of the disease.

Early research on alfalfa showed some protection with annual applications of 4 or 8 fluid ounces of Topguard Terra with the higher rates giving more consistent results, he said. Higher rates should be used in areas with active root rot or historically severe root rot and on heavier soils.

The label has expanded applications that allow two treatments per year not to exceed 12 fluid ounces per application and 19.5 fluid ounces per growing season. More research is currently being done on split applications, Drake said. He stressed producers need to read and follow all label guidelines.

“Some producers with the use of aerial mapping and site-specific application will be able to reduce costs by applying the fungicide only to portions of the field that are affected by the disease,” he said. “This technology is being used for TRR in cotton.”

It is not recommended to apply Topguard Terra at seeding as is done with cotton because it can reduce seedling vigor under certain conditions, Drake said. Most alfalfa is seeded in the fall, so a spring application following fall planting will protect new stands. Treatments should be repeated annually to protect stands in known root rot areas.