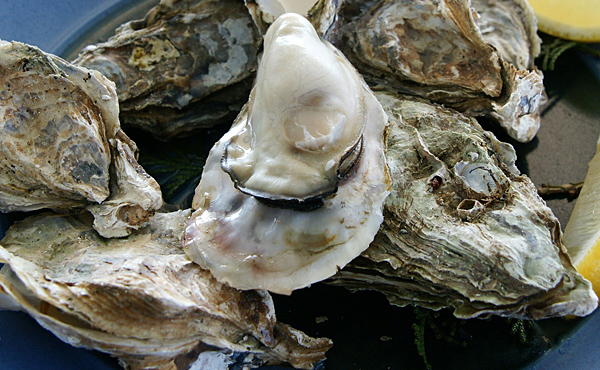 A grower of clams and oysters is shell-shocked after he says New Jersey environmental authorities gave him a permit for a pick-your-own shellfish program, only to reverse course just as the business was to begin. (Wikimedia Commons)

BARNEGAT LIGHT, N.J. (AP) — A grower of clams and oysters is shell-shocked after he says New Jersey environmental authorities gave him a permit for a pick-your-own shellfish program, only to reverse course just as the business was to begin.

Matthew Gregg got a permit from the state Department of Environmental Protection in December after laying out plans to allow members of the public to buy licenses, rent boats and dig shellfish from a plot he leases in Barnegat Bay, just off Barnegat Light.

But after he spent $50,000 and the entire winter preparing the business, the DEP wrote to him in late March and early April, saying the proposed project is not allowed under his permit.

Now, two weeks before the business was poised to take off, Gregg says he does not know what to do, even as he insists state regulations allow him to do what he is proposing.

“We see this as a great opportunity to market our state’s fantastic shellfish as well as a chance to connect people to their food,” said Gregg, owned of Forty North Oyster Farm.

He thought the DEP did, too — until a letter arrived in late March saying the agency “does not approve this activity.”

At issue is making sure shellfish are promptly iced after harvesting — something Gregg says his company will guarantee that customers do by giving them ice for free, making sure the shellfish are placed in it within 90 seconds of coming out of the water, and then checking their cars before they drive off to make sure the customers’ catch is properly iced.

Shellfish taken from the water that are not sufficiently iced can develop a bacterial illness that can sicken people. The state has long worried about contaminated shellfish getting into the market and causing illness, with the resulting bad publicity having the potential to seriously harm New Jersey’s $800 million a year shellfish industry.

But what Gregg proposes — and what he says he told the state he planned to do verbally and in his permit application — is little different from what recreational clammers do every summer at the Jersey shore. They can buy a $10 license, and rent a boat or wade out into shallow waters in approved harvesting areas, and dig up to 150 shellfish a day.

Even though it is advisable to do so, no one forces them to put their catch on ice.

“In our scenario, we own the shellfish that we plant on the (leased area) and dictate the time and temperature controls through the mandate of immediate icing,” Gregg said. “Our harvests are actually safer in that sense. There’s actually a good amount of recreational harvesting occurring on public bay bottom directly next to our proposed pick your own program, with no time or temperature controls.”

The DEP would not comment on the situation beyond saying it is “under review.” It denied his request to submit the matter to an alternative dispute resolution process.

In a letter to Gregg, an agency official said the proposed activity is not allowed under the type of permit Gregg was granted. Among other things, the letter said, the permit requires that shellfish go to a certified dealer after harvesting, not to the general public.

“Your proposed business model fundamentally shifts how aquacultured shellfish product reaches the consumer, potentially allowing a significant number of shellfish to reach the market without the benefit of the public health protections” contained in numerous government oversight regimens, the letter read.

Gregg said state regulations say that a lease holder may authorize another properly licensed individual to harvest shellfish from the leased area. His business plans to become an authorized seller of shellfishing licenses for the state.

He has appealed to state and federal officials for help, with Memorial Day weekend two weeks away, but has yet to get the go-ahead.

Harvest of dogfish to be cut to avoid overfishing

All razor clamming closed from the Columbia River to the California border
October 3, 2022