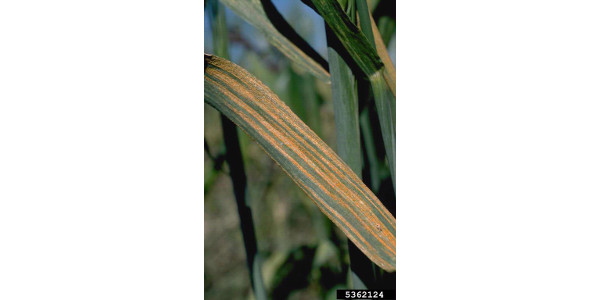 For more than 20 years, a large international group of researchers, including from Aarhus University, has worked purposefully to investigate the function and genetics of Yr15 resistance, a gene that protects wheat against yellow rust. Yellow rust is a widespread and serious fungal disease that causes many losses in wheat globally. (Howard F. Schwartz, Colorado State University, Bugwood.org)

DENMARK — Researchers from Aarhus University have contributed to creating new knowledge about resistance to yellow rust, which is a serious fungal disease in wheat. The results can have global importance.

For more than 20 years, a large international group of researchers, including from Aarhus University, has worked purposefully to investigate the function and genetics of Yr15 resistance, a gene that protects wheat against yellow rust. Yellow rust is a widespread and serious fungal disease that causes many losses in wheat globally. The researchers’ new knowledge is an important piece in the jigsaw regarding the development of new cultivars of wheat that are resistant to yellow rust. The results were recently published in Nature Communications.

Wheat is one of the world’s most important crops. On the global scale 244 million hectares are grown, which is more area than any other crop. The yield is more than 750 million tons per year. Wheat is widely used for both food and feed so it is therefore important to protect it against fungal diseases.

One of the diseases that can infect wheat is the fungal disease yellow rust. Approximately 88 percent of wheat production is susceptible to yellow rust and a conservative estimate says that the disease ruins at least five million tons of the global annual wheat harvest.

The pathogenic fungus evolves quickly to produce new, virulent strains, so there is a constant arms race between plant breeders to develop disease-resistant varieties of wheat and the rust fungus. With a better understanding of the mechanisms that the wheat plant uses for self-defence, plant breeders will be more well-equipped for the task. This is precisely the area in which the research group can contribute significant new results.

– Yr15 is an old acquaintance and plant breeders already have it “in stock”. The new and exciting finding is that we have discovered that Yr15 works differently than other resistance genes. It produces defence responses early in the infection process, and we have found only one single case where the fungus could bypass this defence, says Professor Mogens Støvring Hovmøller from the Department of Agroecology at Aarhus University and one of the researchers in the international group.

A whole artillery is needed

When you breed disease-resistant crops, it is necessary to have access to resistance genes that represent the whole array of modes of action. In this way, if the fungus overcomes one defence mechanism, other resistance genes may prevent the fungus from causing disease in the plant.

With the aid of advanced microscopy, the researchers at Aarhus University observed the actual defence responses associated with Yr15 resistance in wheat. The researchers at Aarhus University utilised their access to a wide array of fungal isolates hosted by the Global Rust Center at AU Flakkebjerg, where fungal isolates from all over the world are stored for the purpose of research in wheat rust.