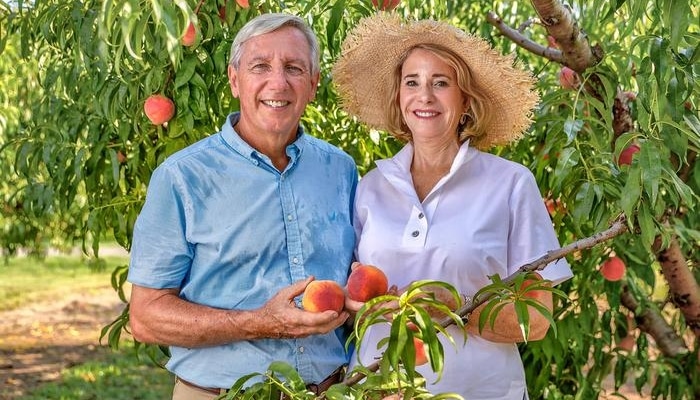 A member of the UGA College of Agricultural and Environmental Sciences (CAES) Alumni Board, Pearson has established the Dr. Maurice E. “Butch” Ferree Scholarship to support students majoring in horticulture in honor of Ferree, who retired in 1998 after 24 years with UGA Extension.

The scholarship, which will be awarded for the first time in fall 2021, will provide scholarship awards for Georgia residents who are rising juniors or seniors majoring in horticulture at CAES. Recipients will be selected by a committee appointed by the college’s dean and preference will be given to students who currently are or have previously been engaged in rural activities including farming.

Pearson and Ferree met as professionals when Ferree became the peach expert for UGA Extension and Pearson headed Pearson Farm, his family’s peach and pecan farm in Fort Valley, Georgia.

“I really got to know him when he became the peach expert for UGA in Athens. He was a valuable adviser to the peach industry,” Pearson said of Ferree. “Being a part of UGA Extension, he was the conduit between research and production agriculture. When he did his research, it benefited us, and we had projects we would support him with. The things he was trying to do for the industry and the ideas he had were very beneficial for us. He’s a good guy and we were proud to have him on our side.”

As head of horticulture for UGA Extension, Ferree — known as “Butch” to all peach growers — acted as a trusted consultant for peach farmers in Georgia. He established a relationship with the growers immediately and began influencing the culture and the business of growing and marketing Georgia’s signature crop.

Raised in Clemson, South Carolina, where his father was a peach expert at Clemson University, Ferree followed in his father’s footsteps, earning his undergraduate degree in horticulture from Clemson in 1965, followed by his master’s degree in 1967. He then attended Virginia Tech, earning his doctorate in 1970.

After serving with the U.S. Army during the Vietnam War, he went on to hold positions at The Ohio State University and Auburn University before joining UGA in 1974. Ferree brought with him ideas and growing practices from different regions but always respected the experiences of the local farmers. He helped develop and steward the Georgia Peach Festival as an opportunity to bring researchers, enthusiasts, growers, educators, governmental agencies, and commercial suppliers and supporters from both Georgia and South Carolina together to share their knowledge and experience.

“When I went to work in Georgia, I got to know him and his father and grandfather, who had been in the peach industry for many years,” Ferree said of Pearson. “The more we worked together on a professional basis, the closer we became as friends. He is an A-number one guy. I was thrilled to death when I found out he had established this scholarship.”

Pearson counts himself fortunate that he is able to support students at UGA and honor his friend and colleague with the scholarship.

“I’m farming on land my great-grandfather farmed on and then my grandfather and my father, on to me and now my son. We have been growing peaches and pecans, especially peaches, for more than 100 years. The enterprise is in my family and in my history and I saw it as a matter of need to encourage those students who want to be involved in agriculture,” said Pearson, who earned his bachelor’s degree in horticulture from CAES in 1972.

Ferree was doubly pleased that the gift will provide further support for students, as he established the Gerald Smith Scholarship in Horticulture in honor of his friend and colleague Gerald Smith, a CAES alumnus, longtime UGA Extension horticulturist and associate professor emeritus. The scholarship, which has been awarded annually since fall 2013, is open to undergraduate students studying horticulture and graduate students studying for master’s degrees in horticulture fields such as nutrition, variety evaluation, growth regulators, genetics or pest control. Ten students have received the scholarship since it was established.

After creating the Gerald Smith scholarship, Ferree recalls that he, Smith, the first student recipient of the scholarship and the head of the Department of Horticulture were able to sit down together for lunch to get to know the student who would benefit. He hopes to be able to do the same with Pearson and a student who will benefit from the scholarship named for him.

“I think that would be wonderful,” Ferree said.

If you are interested in learning more about creating a scholarship or donating to CAES, please contact the CAES Office of Development and Alumni Relations at 706-542-3390.

Detect nutrition changes before you can see cow effects