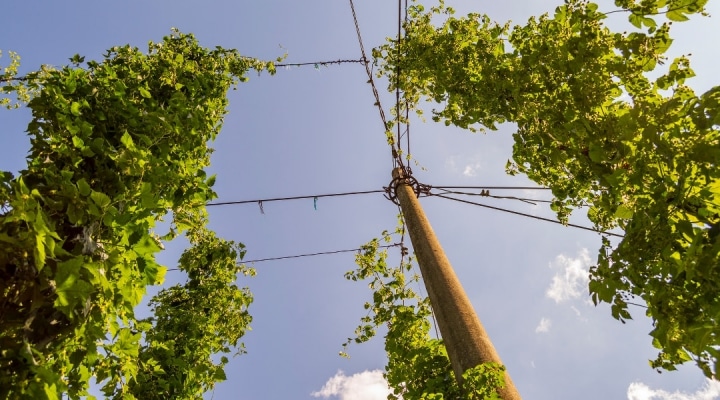 “Quirky hop varieties are all the rage to today’s craft beer consumer,” said Rick Pedersen, owner of Pedersen Farms, which produces hops for a number of Finger Lakes breweries. “Consumers want ‘new and different,’ and this is why a hops breeding program is needed in New York state.” (Stock photo via Andre Klimke, Unsplash)

ITHACA, N.Y. — A $300,000 investment from New York state has paved the way for a new hops breeding program at Cornell AgriTech, which will grow and develop signature New York hops varieties – selected for high yield, preferred flavors and disease resistance – in support of the state’s $3.4 billion craft brewing industry.

The program – to be led by Larry Smart, professor of horticulture in the College of Agriculture and Life Sciences – will integrate AgriTech expertise to help the state’s hops growers overcome breeding and disease-management challenges.

Craft brewing is one of the fastest growing segments of New York’s craft beverage industry, with more than 440 licensed breweries across the state. The industry contributes 20,000 full-time jobs and produces 1.2 million barrels of craft beer annually.

But as the industry has grown, so too has the demand from consumers for locally sourced craft beers with a unique flavor profile. Under current terms of the state’s 2013 farm brewing law, for a brewery to receive a state license no less than 60% of a brewery’s hops and 60% of all other ingredients must be grown in New York state.

New York craft breweries struggle to keep up with these demands, due to in part to a lack of access to New York-developed hops varieties.

“Quirky hop varieties are all the rage to today’s craft beer consumer,” said Rick Pedersen, owner of Pedersen Farms, which produces hops for a number of Finger Lakes breweries. “Consumers want ‘new and different,’ and this is why a hops breeding program is needed in New York state.”

“I think craft beverages are most successful and consumers are most engaged when there is a unique sense of place expressed,” said Chris Gerling, senior extension associate at CCBI. “We’ve gained the most traction with products that suit New York as opposed to imitations of what works in other places. This breeding program will play a crucial role in providing hops to help brewers further demonstrate our own regional strengths and our own preferred styles.”

Smart will ensure that any new hop varieties the program develops are offered to New York growers first, through Cornell’s Center for Technology Licensing, although the development and release of new varieties could take several years.