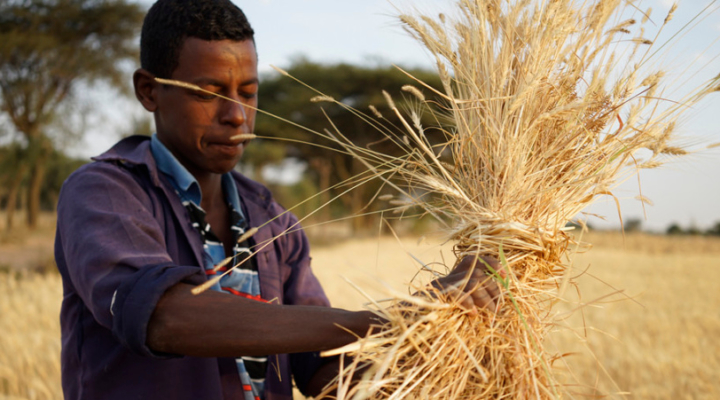 EL BATAN, Mexico — At a time when weather patterns are becoming less predictable and population pressures on food supply are increasing, a group of crop scientists are laying the groundwork for an international crop network to systematically tackle threats to global food security.

Research focused on specific crops achieves progressive genetic gains, but scientists need to adopt a more internationally oriented and integrated approach to leverage technology, expertise and infrastructure with greater efficiency and purpose, said Matthew Reynolds, a distinguished scientist and wheat breeder at the International Maize and Wheat Improvement Center (CIMMYT) in an opinion piece published this week in the journal Science.

Already 795 million poor people do not get enough food to eat, according to the U.N. Food and Agriculture Organization (FAO). By 2030, the number of people living in poverty could increase between 35 and 122 million in large measure because of the impact of climate change on the agricultural sector, the FAO reports.

“We understand how to make crops more resilient to heat and drought, but we’re at a point where we need to accelerate our work.” said Reynolds, backed by a team of co-authors from the scientific community. “Since these problems are transnational in nature, a more global network could accelerate our efforts while increasing efficiency and helping to avoid duplication.”

Through successful wheat-specific collaboration, since the early 1960s, the International Wheat Improvement Network (IWIN), part of the CGIAR-affiliated group of agricultural researchers, has made economically efficient and environmentally sound impacts in crop improvement, which serve as a template for the projected success of GCIN.

A recent study on wheat improvement shows that CGIAR varieties cover about half of the world’s wheat growing area, through IWIN, delivering an economic punch of from $2.2 billion to more than $3 billion a year for resource-poor farmers and consumers.

“The benefit cost ratio of the investment is 100 to 1, even without taking into account the avoided cost of disease pandemics and the land saved from cultivation due to increased yields; economic analysis indicate at least 20 million hectares of natural ecosystem have been spared the plough,” Reynolds said.

“High transaction costs and instability of crop funding have hamstrung urgently needed research,” he added. “This is senseless in light of the extraordinary return on investment to IWIN which could be transferred to GCIN.”

Through a crop-wide collaboration, international scientists can boost benefits from practical work with national agricultural research systems, improving the value of “in kind contributions,” he said.

Aims include standardizing data and phenotyping techniques to best practises, ensuring that information can be shared and understood worldwide.

Data sharing could lead to more accurate descriptions of environments and experimental treatments. Currently, data is often only available selectively and a network would promote it through open access programs.

The benefits of integrated research through the CGIAR group of agricultural researchers and the FAO are well established, but the network under discussion could enhance and improve information sharing transnationally.

Experimental fields – or field laboratories – which are essential for translating scientific breakthroughs to improved crop yields, could at times benefit from more strategic relocation. Often they are in certain areas due to historical, financial or political reasons, not because of current practical needs, Reynolds explained.

Climate change is expected to lead to overall warmer temperatures and increase the intensity of droughts, floods and storms, negatively affecting food security and livelihoods. Climate modelling indicates that sea levels will rise and patterns of flooding and drought will change due to glacial melt at high altitudes.

Higher temperatures will affect crop yields and erratic rainfall could affect both yields and quality. For poor people spending most of their income on food, related price hikes could make it much more difficult to cope.