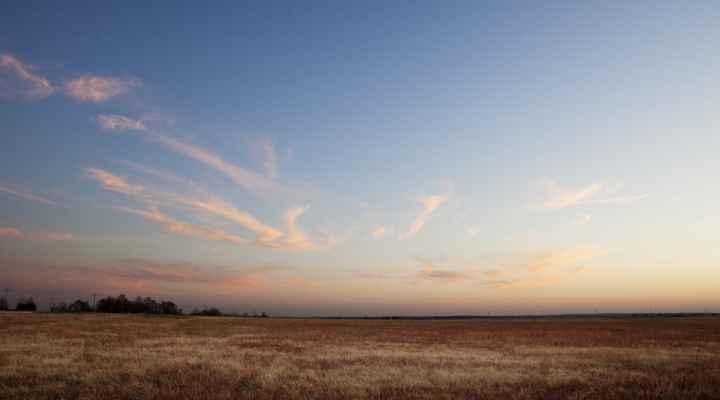 "It tells the story of Montford Johnson, a Chickasaw rancher back in the 1800s," said Paul Sirmons, the film's producer. "When he was a little boy, his mother died and his father, who was not Chickasaw, went back east to make a living. Because the children were Chickasaw, they had to stay with the Chickasaws, so he kind of left them there thinking he would come back but he didn't come back, for more than 30 years." (David Hepworth, Flickr/Creative Commons)

ADA, Okla. (AP) — Down a lonely road in rural Johnston County, there is a scenic view for as far as the eye can see.

Plains and grasslands. Horses and cattle. It is rural Oklahoma at its finest here on this normally quiet, country road.

But as one comes around a corner of the two-lane paved Cyrus Harris Road, everything changes. The view quickly transforms into a field filled with activity — of camera crews, actors scurrying about, booms and microphones, makeup trailers and people seemingly everywhere. The sizable contingency of folks is hard at work on the Penner Ranch, filming the new movie “The Chickasaw Rancher,” which documents the compelling story of Montford Johnson, a legendary Chickasaw rancher who rose to become one of the region’s most well-known cattle ranchers.

“It tells the story of Montford Johnson, a Chickasaw rancher back in the 1800s,” said Paul Sirmons, the film’s producer. “When he was a little boy, his mother died and his father, who was not Chickasaw, went back east to make a living. Because the children were Chickasaw, they had to stay with the Chickasaws, so he kind of left them there thinking he would come back but he didn’t come back, for more than 30 years.”

Johnson would build a hugely successful life on his own through hard work and a life philosophy of caring for others. His story became a prime example of the nobility, work ethic and courage of the Chickasaw people, and Johnson’s story is now being made into a full-length feature film through the graciousness of the Chickasaw Nation.

“I just love the Chickasaw spirit and everything they are doing to keep their heritage alive,” Sirmons said. “Gov. (Bill) Anoatubby has a brilliant vision for the future of the Chickasaw Nation. Part of that is this new way of story-telling.”

The Ada News (http://bit.ly/2u61Ian ) reports that this is the third feature film the Chickasaw Nation has produced, the others being “Pearl” and “Te Ata.” ”Te Ata” will be released this fall in select theaters nationwide. More details will be available soon, according to a statement from the Chickasaw Nation.

The Nation said “Te Ata” is based on the true story of Chickasaw storyteller “Te Ata” Thompson Fisher, who was born in a tiny town in Indian Territory and rose to prominence as an actor and teller of Native American stories. She performed in Europe, at the White House for President Franklin Roosevelt, for the king and queen of England and on stages across the U.S.

“After the death of his mother, a Chickasaw, and the departure of his father, Montford grew up as an orphan. Montford became a capable farmer and worked with friends and family to build a successful cattle ranching business. He befriended the legendary trader and trailblazer Jesse Chisholm, who helped him make agreements with Native American tribes on the Chickasaw Nation’s Western frontier to allow him to ranch the land without threat of attack.

“Montford’s cattle ranch spanned a huge part of central Oklahoma, including modern-day Oklahoma City. Montford was widely known as an honest man who made business decisions that were beneficial to all involved. He was also known for his charitable actions. Montford regularly gave food to starving Native Americans who had been neglected by the U.S. Government. He also took in many orphaned children, giving them a loving home in which they could grow.

“Montford worked to improve the lives of fellow Native Americans who had been forced onto reservations by the U.S. government, making agreements that allowed them to take cattle from his herds whenever they needed food.

Filming locally for the movie project took about 28 days. Two more days of filming will take place in Florida. Sirmons said the project is a massive undertaking that also promotes commerce in the local economy.

“A movie is always bigger than people think. When we go out and find someone’s house to film at or land like this — at the Penner Ranch — I always try to tell them how big it will be because I don’t want them surprised, yet they are always surprised,” Sirmons said. “There are all the trucks, a large wagon with eight dressing rooms, restrooms, three trailers for actors, a special effects trailer, a wardrobe trailer, a grip, electric, camera truck. It is a huge footprint, probably 85 employees, electricians, supervisors, crew. And, we are working with Valencia College out of Florida. They have a training program where students get to work with professionals. So we have a whole professional crew and a college crew to boot.”

Blake Pocquette is the film’s stunt coordinator and of Native American heritage. He’s honored to be a part of documenting history.

“The story about Montford Johnson, being Chickasaw and the cattle empire he started, is amazing. And it was from nothing and he built an empire … A lot of people are going to like this.”

“I think it is so cool, especially for our grandkids — it means a lot,” Walker said.

Information from: The Ada News,http://www.adaeveningnews.com