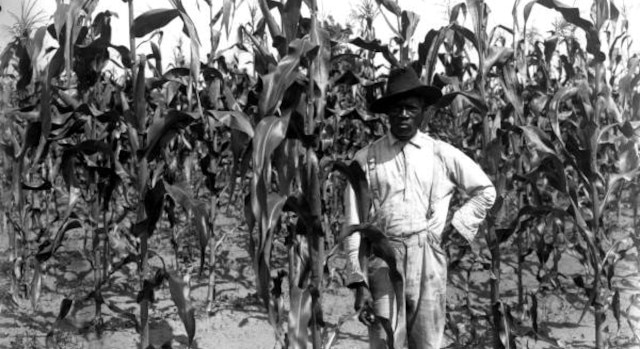 The project will digitize an estimated 150,000 pieces of memorabilia from New Farmers of America (NFA). The project also will offer online access to the materials so students, scholars and the public can learn more about an organization that played a vital role during segregation. Above: African American farmer standing in corn field: Alachua County, Florida. (Florida Memory, Flickr/No copyright restrictions)

INDIANAPOLIS — North Carolina Agricultural and Technical State University has been awarded a new grant to digitize its unique collection of materials belonging to a former national youth organization that helped train generations of Black farmers and leaders.

The project will digitize an estimated 150,000 pieces of memorabilia from New Farmers of America (NFA). The project also will offer online access to the materials so students, scholars and the public can learn more about an organization that played a vital role during segregation.

Vicki Coleman, dean of library services at North Carolina A&T’s F.D. Bluford Library, said the New Farmers of America History and Legacy Collection held by the library would add important pieces to the historical record because agriculture employed so many people throughout the South and the nation during the existence of NFA.

NFA was founded in 1935 to promote vocational agriculture education in public schools throughout the South and teach farming skills, leadership, and citizenship values to young Black males. The organization’s first national headquarters was at North Carolina A&T. S.B. Simmons, a North Carolina A&T faculty member in agricultural education, served as a senior NFA leader for two decades. Similar in purpose and structure to the Future Farmers of America, NFA had more than 58,000 members in 1,000 chapters when it merged with FFA in 1965, a year after the federal Civil Rights Act banned racial segregation.

North Carolina A&T has what it believes to be the largest collection of NFA materials anywhere — documents, records, correspondence, banners, medals, photographs and many other items. Much of it has never been seen publicly.

Netta S. Cox, a university librarian and associate professor of library services, is the principal investigator on the grant. Cox serves as head of serials and government documents at the F.D. Bluford Library and is the library’s agricultural liaison. The co-principal investigator is Antoine J. Alston, Ph.D., a professor of agricultural education and associate dean of academic studies in North Carolina A&T’s College of Agriculture and Environmental Sciences.

The grant will be used primarily to hire a full-time digital librarian and North Carolina A&T students to organize, describe and digitize these primary source materials.

“We must address the tough topics of our past to help our organization create an accessible and inclusive future,” James Woodard, national FFA advisor and chair of the National FFA Board of Directors, recently told FFA New Horizons magazine. “FFA is made up of more than 700,000 members, each with their own unique history, heritage, interests and vision for the future. We honor and respect the differences among us that make us stronger.”

The National FFA Organization is a school-based national youth leadership development organization of more than 735,000 student members as part of 8,817 local FFA chapters in all 50 states, Puerto Rico and the U.S. Virgin Islands.

Feed Industry reunites at PISC to do business

What are controlled-release fertilizers?