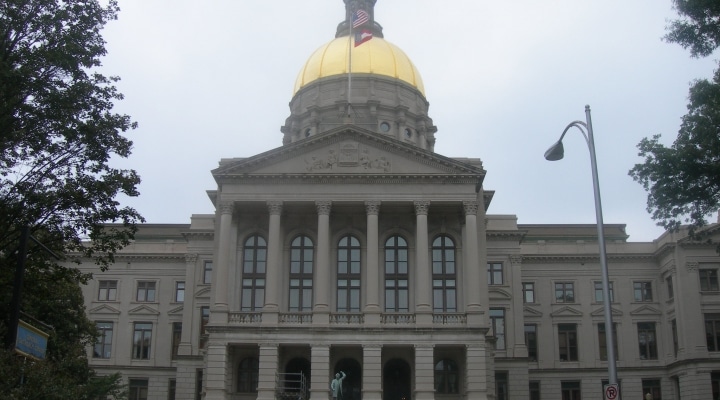 Under the golden dome of the Georgia State Capitol, a new exhibit in the Georgia Capitol Museum shines a spotlight on agriculture in Georgia. The exhibit is designed to educate visitors on the importance of the state’s No. 1 industry. (photo by Jimmy Emerson, DVM, creative commons/flickr.com)

ATHENS, Ga. — Under the golden dome of the Georgia State Capitol, a new exhibit in the Georgia Capitol Museum shines a spotlight on agriculture in Georgia. The exhibit is designed to educate visitors on the importance of the state’s No. 1 industry.

The Georgia Capitol Museum is a unit of the University of Georgia’s Richard B. Russell Library for Political Research and Studies, which rallied a team of UGA historians and archivists to create “From Your Farm to Your Table,” a permanent exhibit to highlight the influence of agribusiness on Georgia’s economy and culture.

Karin Johnston Dalton, museum registrar and collection and exhibitions manager for the Georgia Capitol Museum, said the idea for the agriculture exhibit came from Georgia Sen. Valencia Seay (D – District 34/Riverdale), who sponsored a bipartisan bill to create this exhibit. The bill was passed by the Georgia General Assembly in 2014 and signed by then-Governor Nathan Deal.

“Senator Seay feels she has really learned a lot about agriculture [during] her time in the Senate, and she wanted children–especially those from urban settings–to learn not only where our food comes from, but [also] that agriculture could be a viable career path for them,” Dalton said.

The colorful exhibit highlights the seasons in which various Georgia crops are harvested as well as some of the ways farmers use technology, including the use of apps and drones to monitor crops for diseases and pests and to conserve water. The exhibit includes an interactive kiosk where students can explore games and videos featuring interviews with urban farmers in and around the Atlanta area.

The drone featured in the exhibit was donated by Andrew Paterson, UGA Regents Professor and director of the UGA Plant Genome Mapping Laboratory, and Changying Li, professor and head of the UGA Phenomics and Plant Robotics Center.

The drone was used to monitor the growth of cotton plants in plant genetics research at the Iron Horse Farm, which is part of UGA’s College of Agricultural and Environmental Sciences (CAES).

UGA Libraries staff involved in creating the exhibit included Sheryl Vogt, director of the Russell Library and the Georgia Capitol Museum; Ashton Ellett, politics and public policy archivist for the Russell Library; and Karin Dalton. UGA Libraries’ science research and instruction librarian and subject liaison to CAES Kelsey Forester, along with Bryce Trotter and Jennifer Somers of the Georgia Department of Agriculture, assisted with fact-checking the text, Dalton said.

The design for the new exhibit is an update to the Capitol Museum exhibits, which were last renovated in the late 1990s, Dalton added.

Seay hosted an unveiling ceremony for the exhibit on June 4 for members of the Georgia Legislature and Capitol staff.

Seay, who grew up in Atlanta, was first introduced to agriculture while serving on the Georgia House Agriculture and Consumer Affairs Committee before being elected to the Senate. She remembers traveling to Middle Georgia with other House Agriculture Committee members to see peaches picked and processed at Lane Orchards. Several years ago, she attended an Urban Ag Academy hosted by Iowa State University for urban legislators.

“I saw an autonomous tractor equipped with the latest technology going down corn fields as far as the eye [could] see, beaming back data about the crop and soil. I was fascinated as was my grandson, who went with me,” Seay recalled. “Most kids are not aware of basic agriculture, much less the technology being used in agriculture today. It came to me that we needed an exhibit at the Capitol that would highlight Georgia agriculture. My grandkids gave me the idea for it to be an interactive display with games kids can play because they were born into technology.”

Seay credits the late Sen. Jack Hill for helping her secure money from the state’s budget for the exhibit as well as UGA Librarian and Associate Provost Toby Graham and his team for bringing her idea for the exhibit to life.

“I gave them [UGA Library team] the idea and they pulled it all together,” Seay said. “There’s a lot of information in that display, and there’s a teaching element to the display that teachers can use to get their kids involved with the interactive computer game kids can play. My grandson loved playing to get his score up.”

Dalton said the display is the latest for the museum, which is charged with collecting, maintaining and exhibiting significant artifacts within the State Capitol.

“There is information on what crops are popular in Georgia and text panels telling the story of the state’s agriculture, including all of the new technologies that are being used,” Dalton said. “We also have information on how to plant, nourish and harvest crops, as well as interviews with chefs from Atlanta-area restaurants to learn how the food grown is made into the dishes they serve.”

Visit libs.uga.edu/capitolmuseum for more information about visiting the Capitol.