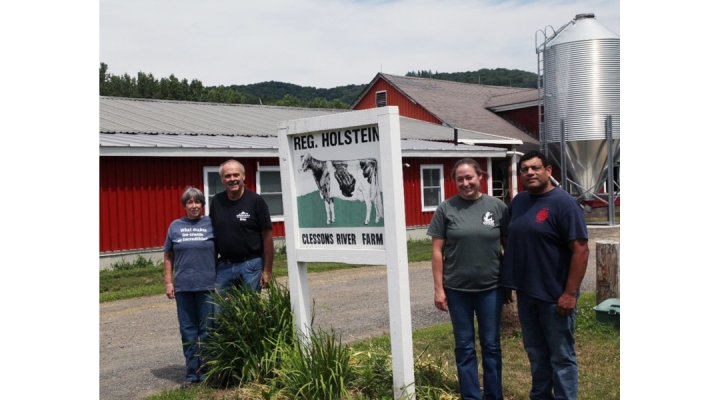 BUCKLAND, Mass. — Clessons River Farm is a 327 acre, 5th generation dairy farm located in Buckland, Massachusetts. Melissa’s Great Grandpa (Walter) Scott moved to the farm in 1910, at 2 years of age, with a few cows; his father died in 1922 when he was 14. His stepson, Melissa’s Grandpa (Francis) Willis came to the farm in 1933. Great Grandpa Scott turned the farm over to his stepson, Francis Willis, and step-grandson, Paul Willis (Melissa’s father) in 1975 when Paul received his Associate’s Degree in Animal Science from the Stockbridge School of Agriculture and returned home to the farm. Melissa (Willis) Griffin, started working full-time with Paul on the farm in 2005. The farmland is under the Clessons River Farm Realty Trust owned by Paul and Judy Willis and Melissa and Adam Griffin. Ownership of the farm business was transferred from Paul and Judy to Melissa and Adam in 2021.

We crop 35 acres of corn and 100 acres of hay to feed our 65 dairy cows and 60 dairy heifers. The old dairy barn with the milk room was built in 1954. The hay barn was added in 1956 and the steel building was built with tie stalls in 1979. The heifer barn was built in 1984 and the manure pit in 1985. We remodeled the tie stall barn and put in free stalls and a step-up parlor in 1999. In 2019 we replaced half of the metal loop-free stalls in the milk cow barn with Easy Fix flexible stalls and put in sand saver stall mats to increase cow comfort and save on the use of sand. In August of 2020, we transitioned the cows from milking in our walk-through, step-up parlor to milking with a Lely A5 robot. The robot has provided many benefits to the farm. It has allowed us more time during the day to focus on other areas of the business including working in the fields during crop season and addressing herd health and reproduction. It has decreased utility expenses, being more energy efficient than the old vacuum pump system. It has increased our production per cow by providing a more individualized approach to milking–allowing our fresh cows to milk up to six times a day and providing around 100 data points on each cow. In 2021, in exchange for a 15-year agricultural covenant on the farm property, we received a Massachusetts Department of Agricultural Resources (MDAR) Farm Viability Enhancement Program Grant, to build an addition on the current milking cow barn which added back the twelve free stalls that were removed to install the robot and replaced the remaining metal loop free stalls with Easy Fix flexible stalls and sand saver mats. The addition also provided a separate area to house dry cows, creating a better environment geared toward providing the proper nutritional needs of dry cows. Additional projects yet to be completed include the purchase and installation of a conveyor feed system with mixer wagon and installation of a Lely Discovery Manure Collector. These will eliminate the need to bring equipment into the cow barn on a daily basis, limiting disruption to the milking cows and the robot and providing better air quality by eliminating equipment exhaust in the barn. The Manure Collector will also reduce diesel fuel consumption.

The farm will be officially recognized at the Eastern States Exposition in Springfield, MA on September 16, 2022.