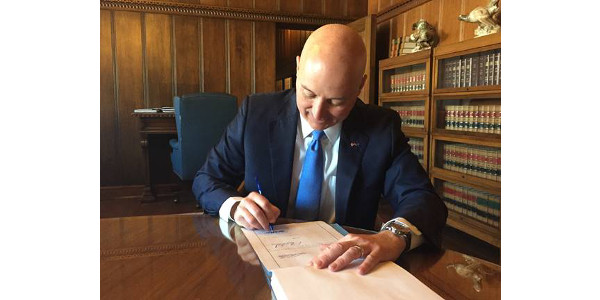 “As with the mergers that created our Transportation and Veterans agencies in 2017, this merger will make our state government work more effectively and more efficiently,” said Governor Ricketts. “The new Department of Environment and Energy that will allow the state to form a more unified vision and strategic plan for our work in these related areas.”

“The two agencies currently have a number of related functions and similar services which will be enhanced for Nebraskans by combining efforts,” said Director Macy. “Thank you to the Legislature for supporting our work.”

David Bracht, who oversaw the Nebraska Energy Office from 2015 to 2018, also spoke of the benefits of the bill: “The combination of the agencies is going to allow for more resources to achieve the Energy Office’s mission by generating a number of efficiencies and synergies.”

The Governor also signed LB 301 to assign sole responsibility of the Boiler Inspection Act, the Nebraska Amusement Ride Act, and the Conveyance Safety Act to the Fire Marshal. The bill’s sponsor, Senator John Lowe of Kearney, spoke of the wisdom of housing the inspections under one roof.

“Right now, the Department of Labor and the Fire Marshal have overlapping responsibilities and inspections within these three acts,” said Senator Lowe. “This overlap can lead to the need for two different inspections, from two different state agencies, on the same item in a building. This can lead to confusion if one agency approves a boiler or an elevator, but the next agency comes out on a different day and says that changes are needed on that same boiler or elevator.”

CentralStar ﻿merger poised for success
May 1, 2019