Home » New data on soil lost due to water 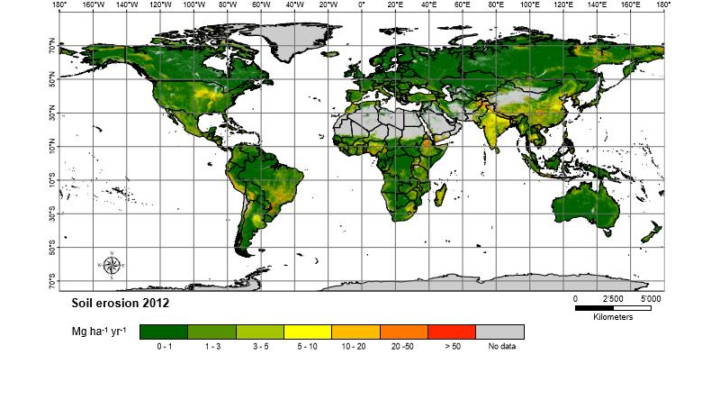 The spatial pattern of soil erosion in 2012. Areas classified as having very low, and low erosion rates represent almost 85 percent of the study area. About 7.5 million km2 in total (6.1 percent of the land), exceeds the generic tolerable soil erosion threshold. (European Union, University of Basel)

BASEL, Switzerland — According to a new study by the University of Basel, the European Commission – Joint Research Centre and the Centre for Ecology & Hydrology (CEH, UK), almost 36 billion tons of soil is lost every year due to water, and deforestation and other changes in land use make the problem worse. The study also offers ideas on how agriculture can change to become a part of the solution from being part of the problem

Soil is an essential resource for satisfying human needs, such as food and feed production, fibre, clean air and water. Soil is not an infinite resource though. Human activity and changes in land use lead to increased soil loss, which in turn degrades nature’s recycling system and diminishes land productivity, thus decreasing human wellbeing worldwide.

The most detailed mapping of soil erosion ever

The research findings, “An assessment of the global impact of 21st century land use change on soil erosion”, offer an unprecedentedly thorough, high resolution assessment of global soil loss.

The study quantifies the effects of land use change between 2001 and 2012 and finds that during this period, 35.9 billion tonnes of soil had been displaced due to water (mostly rainfall) annually. This is the equivalent of the weight of the concrete that it would take to build 250 of the world’s largest dam, the Three Gorges Dam in China. Soil loss increased by 2.5% between 2000 and 2012 mainly due to clearing down forests for agricultural purposes.

The greatest increase in soil loss is estimated for Sub-Saharan Africa, South America and Southeast Asia. This means that countries with less developed economies are estimated to have experienced the highest soil erosion rates.

South America surpasses Africa with an estimated increase of soil erosion of over 10% in 2012. This seems to be driven mostly by deforestation and the large expansion of cropland areas in Argentina (41.6% of its territory dedicated to cropland), Brazil (19.8%), Bolivia (37.8%) and Peru (5.9%). During the same period, soil erosion in Africa increased by 8%, mostly in the Equatorial countries.

The study investigates global soil erosion dynamics by means of high-resolution spatially distributed modelling (ca. 250?×?250?m cell size). The geo-statistical approach allows, for the first time, the thorough incorporation into a global soil erosion model of land use and changes in land use, the extent, types, spatial distribution of global croplands and the effects of different regional cropping systems. This, coupled with an improved global assessment of rainfall erosivity dynamics and the latest globally consistent dataset resulted in a state-of-the-art global model based on the Revised Universal Soil Loss Equation or RUSLE.