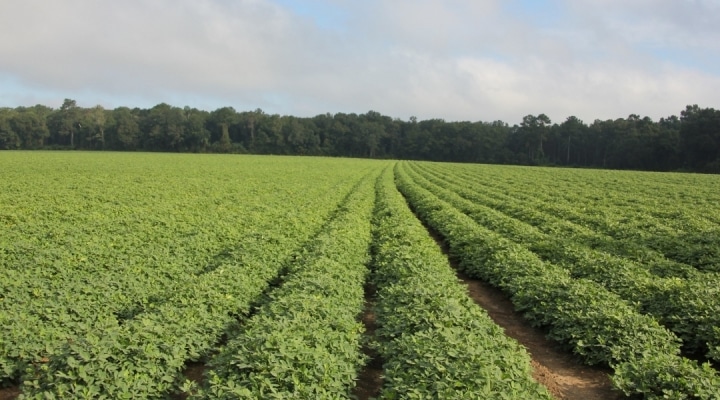 Newly released data reports that 3.2 gallons of water is used to produce one ounce of shelled peanuts. Water usage for major tree nuts has also improved but remains higher than peanuts. Almonds use 28.7 gallons; pistachios use 23.6 gallons; and walnuts use 26.7 gallons of water to grow a one ounce serving. (photo by Georgia Peanut Commission, creative commons/flickr.com)

ATLANTA – The water footprint of peanuts has been relatively small for decades, but updated data shows the industry has improved water efficiency by nearly a third.

Newly released data reports that 3.2 gallons of water is used to produce one ounce of shelled peanuts. Water usage for major tree nuts has also improved but remains higher than peanuts. Almonds use 28.7 gallons; pistachios use 23.6 gallons; and walnuts use 26.7 gallons of water to grow a one ounce serving.*

In the latest analysis, researchers used updated and “state-level input data such as harvested area, production, yield and irrigated area,” said Dr. Mesfin Mekonnen, assistant professor, Department of Civil, Construction and Environmental Engineering at the University of Alabama. “The use of updated and state-level data, particularly yield data, has improved the estimates.”

“Production research efforts through the National Peanut Board, state associations and the Peanut Research Foundation have led to significant improvements in yields over the past decade,” said NPB President and CEO Bob Parker. “Peanut farmers today are producing about 50% more peanuts with fewer inputs, including irrigation, than they were consistently 10 years ago.”

“Farmers are always looking to gain efficiencies in crop production,” said peanut grower, NPB Arkansas board member and Research Committee Chair Greg Baltz. “Peanut farmers have made significant investments in production research and this science has played a role in adoption of improved water use practices. We have an inherent desire for both economic and environmental security into the future.”

Peanuts are a healthy, nutritious food and are environmentally friendly, requiring significantly less water to grow compared to tree nuts. As a legume, they are nitrogen-fixing, which means they require less supplemental fertilizer and add beneficial nutrients to the soil for the next crop. In addition to using just 3.2 gallons of water to produce one ounce, peanuts are a zero-waste crop. From the roots to shells, every part is utilized throughout the planting, growing, harvesting and production process. Read more about peanuts and sustainability.

Since 2001, the National Peanut Board has allocated more than $38.5 million to production research projects including to improve water efficiency, technology and more. These advancements as well as continued collaboration and efforts across the peanut industry allow peanut growers to meet the various needs of consumers. Increased production and increased demand have led to two consecutive years of record peanut per capita consumption levels, reaching an all-time high of 7.9 pounds in 2021.

* This data presents U.S. water usage per ounce based on blue water (irrigation) for the period 2000/2016 and grey water (to assimilate applied nitrogen) for 2004/2013. The sources of the data are the California Department of Food and Agriculture; Food and Agriculture Organization of the United Nations; Mekonnen, M.M. of the University of Alabama; and the United States Department of Agriculture. Limitations of the results include the quality and availability of data.