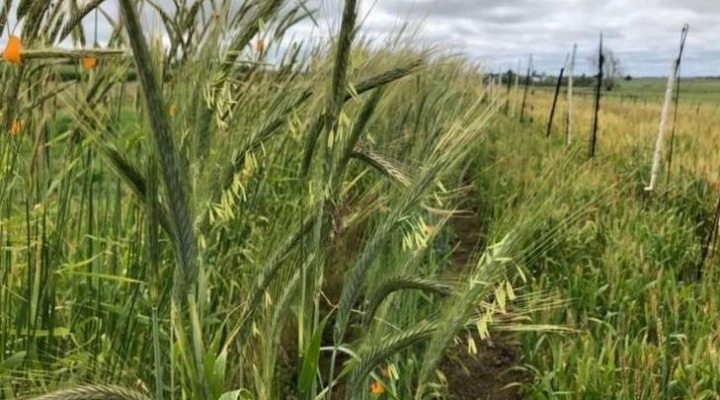 Rye growing on Walnut Grove Farms in Logan County is part of a study looking at the grain's agronomics and marketing potential. (Photo by Szymon Szprejda)

LEXINGTON, Ky. — An idea that started with the curiosity of an enterprising south-central Kentucky farmer is showing promise as another crop for Kentucky small grain producers, as well as a reliable source of Kentucky-grown cereal rye for bourbon distillers, bakers and millers.

In a state long recognized for its progressive farmers, the Halcomb family of Walnut Grove Farms in Logan County are known as some of the most innovative. In 2009, the late Don Halcomb began experimenting with cereal rye as a cover crop on his grain fields. Like some Kentucky farmers, the Halcombs chose to plant rye as a cover crop, because it produces an elaborate root system that reduces soil erosion and keeps nutrients on the farm. In 2012, Halcomb started wondering what would happen if he allowed the crop to produce grain.

“My dad was a fifth-generation farmer, and my brother John and I are sixth-generation farmers in Schochoh,” said Sam Halcomb, Don Halcomb’s son. “We know that every generation has to modify their operation and business plan to survive. We have to be open and look for new ideas. Cereal rye seems promising, if we can figure out the agronomics and marketing.”

Don Halcomb first shared his idea of producing cereal rye for grain with University of Kentucky wheat breeder David Van Sanford. Having worked on numerous research projects together for more than 30 years, the two were longtime collaborators and friends. Halcomb also started talking to craft distilleries and sold a small amount of rye to some of them between 2012 and 2014.

“Don and I talked casually about rye for a few years, and then in 2015, he planted a few strips of KWS hybrid rye on the same farm where we had the wheat and barley variety trials,” said Van Sanford, a professor in the UK College of Agriculture, Food and Environment. “We harvested part of the strips and estimated the yield, and then he took the grain down to the Walnut Grove shop to evaluate the quality.”

The Halcomb family was pleased with the yield, the quality and the crop’s potential. They were not the only ones.

The Kentucky Small Grain Growers Association was becoming involved as more farmers were showing interest in growing the crop. More UK specialists were coming on board too, including Chad Lee, director of the UK Grain and Forage Center for Excellence. Lee began to take on a leading role studying the crop’s agronomics.

“This project is exciting, because we could potentially develop a new crop for Kentucky farmers and improve the health of our soils at the same time,” he said.

Barbara Hurt, executive director of DendriFund, was ecstatic at what she saw when she was invited to attend a UK rye field day at Walnut Grove Farms in 2015. DendridFund is a foundation started by Brown-Forman and the Brown family, sixth-generation owners of Brown-Forman. The foundation works to inspire joint action to improve the natural, social and economic environment for future generations.

“I got really excited, because the idea of bringing commercial rye back to Kentucky incorporated all three aspects of how DendriFund defines sustainability,” she said. “Without a way to financially support the adoption of environmentally beneficial practices, it is hard to sustain these practices beyond initial trials. The Halcombs cracked the code of improving long-term soil health and water quality without sacrificing short-term requirements for sustainably living off the land.”

Before Prohibition, Kentucky producers regularly grew rye, but after that, rye production moved to colder climates.

“Currently, distilleries are sourcing their rye from Canada and Europe,” Hurt said. “If we can get a local source, these distilleries can reduce their transportation costs, reduce greenhouse gas emissions and further support the local economy.”

“We got serious about planting rye plots with the 2019 crop, when we planted a trial involving different rye cultivars including hybrids on three different planting dates,” Van Sanford said. “We repeated the study in 2020.”

In 2019, DendriFund secured grants for four, geographically dispersed Kentucky farm families to produce 25 acres of rye, expanding the project to farm-scale trials with UK. They used varieties and practices that were showing promise in CAFE research. Woodford Reserve Distillery purchased the rye in September, after three of the four farms passed their quality standards. The money the farmers received from the sale went back into the fund to help the program become self-sustaining and involve more producers.

Woodford Reserve will use the rye for distillate flavor research in partnership with Van Sanford. The distillery made a 10-year commitment in 2020 to repeat distillation trials for another four years to evaluate the grain in the project through maturation. Woodford Reserve agreed to share the results of their sensory research with farmer participants and other distilleries to further encourage funds raised through purchase.

“Kentucky-grown rye could have a flavor and taste that is unique to Kentucky,” Van Sanford said. “It could result in distilleries producing many specialty products featuring Kentucky rye. If it has the same flavor as imported rye, there is opportunity for us in current products.”

“The flavor profile and product yield of the first Kentucky-grown rye used at the Woodford Reserve Distillery has been of the highest quality,” said Chris Morris, Woodford Reserve master distiller. “We are very pleased and encouraged by these early results and look forward to another year of testing.”

UK researchers hope to work with their colleagues at the James B. Beam Institute for Kentucky Spirits at the University of Kentucky to increase local distilleries’ interest in Kentucky-grown rye.

In 2020, UK and DendriFund asked American Farmland Trust to become a partner in the program and steward the project’s management. American Farmland Trust applied for and received a grant from the Kentucky Agricultural Development Board for the Kentucky Commercial Rye Cover Crop Initiative on behalf of the partners. This funding will help expand the initial pilot project to 20 producers, each growing 25 acres of rye for the 2020-2021 growing season.

“This project is exciting, because not only are farmers raising Kentucky-grown rye for the brewing, baking and distilling industries, but they are improving soil health at the same time. At American Farmland Trust, we are conserving farmland by the acres and by the inch, and these farmers are keeping the land in agriculture,” said Billy Van Pelt, who is the senior director of external relations for the trust and a 1997 graduate of the College of Agriculture, Food and Environment. “Our overall goals for the project are to have Kentucky farmers producing 3,000 acres of rye within three years and to have 10,000 acres in rye production by 2030. We estimate those 10,000 acres would provide an additional $5 million in farm revenue.”

Scott Franklin is the rye project manager for American Farmland Trust and is working directly with participating farmers.

“Through this initiative, we can be innovators in agriculture conservation, protect our farmland, and keep farmers on that land,” he said. “Ultimately, this project gives farmers another option, and more options are a good thing.”

“This pilot project is going to give us a lot of climates, soil types and growing conditions to determine whether Kentucky farmers can consistently grow rye and meet food and beverage quality standards,” Lee said. “We still have much to learn as we are using borrowed genetics and still determining the management practices for rye in Kentucky.”

Agriculture and natural resource agents with the UK Cooperative Extension Service are working with Lee to recruit farmers and scout fields during the season.

“I’ve had several growers ask about the project, because there are distilleries nearby,” said Traci Missun, Oldham County agriculture and natural resources extension agent who scouted producers’ fields during the 2019-2020 season. “It’s definitely viable, but it can have some of the same challenges that wheat has as well as some new weed control obstacles.”

This fall, the Halcombs plan to plant 70 acres of rye. They hope interest in the project continues to grow.

“It is great that we have a team of scientists at UK that can help us investigate new crop opportunities,” Sam Halcomb said. “When you also have support from the industry and commodity groups, then this crop has a great potential to make a contribution to Kentucky’s agricultural economy.”

More information on the Kentucky Commercial Rye Cover Crop Initiative is available by contacting Franklin at sfranklin@farmland.org or 502-272-0726.

Ky. Soybean Board urges motorists to share the road