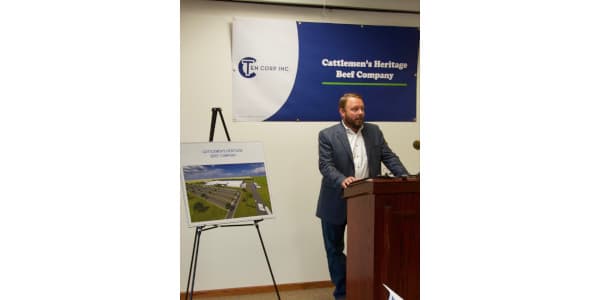 AMES, Iowa — Construction is planned to begin in spring 2022 for a $325 million federally-inspected beef processing facility in Mills County, Iowa to process 1,500 head per day, employ 750 workers and an annual economic impact is estimated at $1.1 billion.

Chad Tentinger, founder and owner of TenCorp Inc., project developer and an Iowa cattle producer, wants to provide a market for cattle raised by smaller, independent cattle producers. Cattlemen’s Heritage is a newly formed corporation and with its roots in livestock production, plans to open the plant in late 2023.

The facility will be situated on the Mills-Pottawattamie County line in western Iowa, fronted by Interstate 29, giving access to infrastructure and a good labor force. Ernie Goss with Goss & Associates conducted the economic impact study of the Cattlemen’s Heritage Beef Plant. He says the facility will serve as a game changer for the surrounding counties by providing more than 3,300 jobs through construction and have a total impact of $6.4 million.

Iowa Secretary of Agriculture Mike Naig championed the cause for providing more market access for Iowa’s cattle producers, as well as new jobs and the expansion of Iowa’s agriculture. “Creating more economic value to Iowa agriculture and the state’s livestock industry will help bring the next generation back to the farm,” Naig says. “This is important for the success and sustainability of the ag community and our state’s economy.”

Tentinger says Cattlemen’s Heritage wants to be able to help young farmers get into the cattle business and stay in the industry. The plant will start by harvesting about 800 head per day for the first several months and ramp up to 1,500 head per day by the end of the first year. A full workforce will be hired to be on hand when the plant opens.

The Iowa Cattlemen’s Association looks forward to the plant providing an opportunity to harvest cattle within the state of Iowa. “This facility will provide another market access for Iowa’s cattle producers with hopes of boosting cattle prices through competition and giving the state a needed economic boost for agriculture and the local area,” Matt Deppe, CEO of ICA says. “We look forward to having continued conversations with the Cattlemen’s Heritage group and how they can help our state’s cattle producers.”