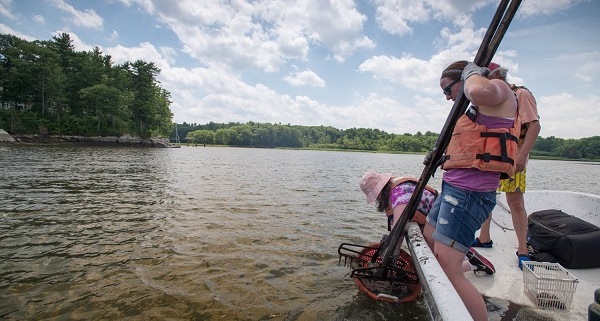 In the Great Bay Estuary, a team of undergraduate and graduate students collect oysters to look at environmental conditions that might favor Vibrio parahaemolyticus. (Credit: UNH)

DURHAM, N.H. — University of New Hampshire scientists in partnership with the FDA and public health and shellfish management agencies in five states have identified a new strain of a bacterial pathogen that has contaminated seafood, sickening shellfish consumers along the Atlantic Coast of North America at increasing rates over the last decade.

NH Agricultural Experiment Station scientists have discovered that a Vibrio parahaemolyticus strain identified as ST631 is a predominant strain endemic to the Atlantic Coast of North America and has been traced to shellfish harvested in seven Atlantic coastal states and Canada. ST631 is the second most prevalent strain isolated from patients sickened by product sourced to the Northeast United States. Vibrio parahaemolyticus is the leading seafood-transmitted bacterial pathogen worldwide with an estimated 45,000 infections in the United States every year. It causes gastroenteritis and, rarely, lethal septicemia. The findings were announced in a letter to the editor at the Journal of Clinical Microbiology “Sequence Type 631 Vibrio parahaemolyticus, an Emerging Foodborne Pathogen in North America.”

“We identified this strain nearly ten years ago in New Hampshire where there have been no reported shellfish-borne infections, and more than five years ago from clinical sources from Massachusetts so we knew it was a potential problem in this region. We were surprised to learn that it was so widespread and that it could thrive in such contrasting water temperatures as would be found in Florida compared to Prince Edward Island and the Gulf of Maine,” said Cheryl Whistler, associate professor of molecular, cellular, and biomedical sciences and Director of the Northeast Center for Vibrio Disease and Ecology at UNH.

UNH researchers and their collaborators now will develop quantitative methods for detecting this strain in the environment, and conduct additional analysis to understand how this pathogen evolved from harmless to pathogenic. “We now know which strain is out there in shellfish areas, which means with directed surveillance, we can monitor its presence, its spread, and potentially reduce infections,” Whistler said.

Experiment Station researchers have been tracking Vibrios in the Great Bay Estuary for 10 consecutive years, and previously in the 1990s and 2000s. In the 1980s, UNH scientists were the first to detect Vibrio vulnificus – a potentially more serious species of Vibrio – in the Great Bay estuary. In a major breakthrough in shellfish management and disease prevention, in 2015 UNH scientists announced they invented a new method to detect the specific Vibrio parahaemolyticus strains that cause human illness in New England oyster beds, including ST631 and the ecologically invasive ST36. The patent-pending detection method is a significant advance in efforts to identify shellfish harboring disease-carrying strains of Vibrio parahaemolyticus.

This material is based upon work supported by the NH Agricultural Experiment Station, through joint funding of the National Institute of Food and Agriculture, U.S. Department of Agriculture, under award numbers 233555 and 1004199, and the state of New Hampshire. This work also is supported by funding from the National Science Foundation EPSCoR Program, New Hampshire Sea Grant College Program, National Institutes of Health, and the UNH Graduate School.

Founded in 1887, the NH Agricultural Experiment Station at the UNH College of Life Sciences and Agriculture is UNH’s original research center and an elemental component of New Hampshire’s land-grant university heritage and mission. We steward federal and state funding, including support from the USDA National Institute of Food and Agriculture, to provide unbiased and objective research concerning diverse aspects of sustainable agriculture and foods, aquaculture, forest management, and related wildlife, natural resources and rural community topics. We maintain the Woodman and Kingman agronomy and horticultural farms, the Macfarlane Greenhouses, the Fairchild Dairy Teaching and Research Center, and the Organic Dairy Research Farm. Additional properties also provide forage, forests and woodlands in direct support to research, teaching, and outreach.