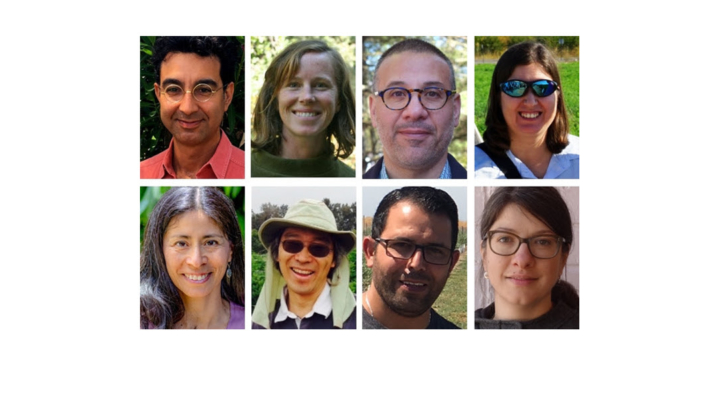 The new academics are:

Kamyar Aram joined UC ANR in August 2019 as UCCE advisor in specialty crops. He serves Contra Costa and Alameda counties. Previously, Aram was a post-doctoral scholar at UC Davis working on research and outreach for management of vectored grapevine diseases. He has bachelor’s degrees in plant biology and Latin from Ohio State University, a master’s degree in horticulture from Cornell University and a doctorate degree in plant pathology from UC Davis. His doctoral research focused on the life cycle of the Sudden Oak Death pathogen in aquatic environments. For his master’s thesis, Aram studied the use of compost as a source of nitrogen and to suppress soilborne diseases in vegetable production.

Marisa Coyne was named academic coordinator of volunteer engagement in the UC Master Gardener Statewide Program in April 2019. Previously, Coyne was a community education specialist at the UCCE office in Marin County, where she managed the 4-H Youth Development Program. Originally from Philadelphia, Coyne has worked in rural and urban communities and in food, agriculture and wilderness spaces, providing interdisciplinary, inquiry-based educational opportunities for learners of all ages. Coyne holds a bachelor’s degree in communications at Temple University and a master’s degree in community development at UC Davis.

Amer Fayad joined UC ANR as director of the Western Integrated Pest Management Center in July 2019. He is a plant pathologist with research experience on the identification, epidemiology, biological and molecular diversity of viruses. Prior to joining UC ANR, Fayad served in several capacities at Virginia Tech, most recently as associate director and Africa program manager of the Feed the Future Innovation Lab for IPM. Fayad has a bachelor’s degree in agriculture and a master’s degree in crop production from the American University of Beirut. He earned a doctorate degree in plant pathology, physiology and weed science from Virginia Tech.

Joy Hollingsworth was appointed nutrient management and soil quality advisor, serving Fresno, Kings, Madera and Tulare counties, in April 2019. Before taking her new position, she served as a staff research associate at the UC Kearney Agricultural Research and Extension Center in Parlier. Previous to that, Hollingsworth was a junior specialist in the UC Davis Department of Plant Sciences, where she designed and implemented agronomic field trials for canola, camelina, sugar beets and castor. Hollingsworth has a bachelor’s degree in communications and a master’s degree in plant science from Fresno State.

Susan Matias joined UC ANR in July 2019 as a UCCE specialist in the Department of Nutritional Sciences and Toxicology at UC Davis. Before coming to UCANR, Matias was a research scientist with the California Department of Public Health and a specialist at UC San Francisco. From 2013-18, she was an assistant project scientist in the Department of Nutrition at UC Davis. Matias has a bachelor’s degree in psychology and a master’s degree in educational psychology from Pontificia Universidad Católica del Perú. She earned a doctorate degree in epidemiology from UC Davis, with an emphasis in international and community nutrition. Her research interests include maternal and child nutrition, immigrant health, food security, obesity and diabetes prevention.

Joji Muramoto became UC ANR’s first organic production specialist in May 2019. He has a joint affiliation with UCCE and the Center for Agroecology and Sustainable Food Systems at UC Santa Cruz. In his new role, Muramoto will coordinate a statewide program focused on fertility and pest management in organic production systems across the state. Muramoto has bachelor’s, master’s and doctorate degrees in soil chemistry from Tokyo University of Agriculture. He has conducted research and extension on fertility and soil-borne disease management in organic and conventional strawberry and vegetable production since 1996.

Mohamed Nouri joined UC ANR in April 2019 as an area orchard systems advisor serving San Joaquin County. He will conduct a research and extension program to address high-priority production and pest management issues in walnuts, sweet cherries, apples, oil olives and other crops. Because San Joaquin County is the statewide leader in cherry and walnut production, Nouri will be a regional and statewide leader, facilitating interaction among campus-based academics, UCCE advisors and community stakeholders. Previously, Nouri worked at the UC Kearney Agricultural Research and Extension Center as a graduate student and post-doctoral researcher. He performed research on fungal diseases of major fruit and nut crops. Nouri has a bachelor’s degree in life and earth sciences, a masters in microbiology and plant pathology and a doctorate degree in plant pathology, all from Tunis ElManar University.

Kosana Suvocarev joined UC ANR as a UCCE biometeorology specialist in March 2019. Before taking this position, she was a postdoctoral fellow at the University of Arkansas, where she was part of a team effort focused on rice farming, water conservation and greenhouse gas emission reduction practices in the area of the Mississippi Alluvial Aquifer. Suvocarev earned bachelor’s and master’s degrees at the University of Novi Sad in Serbia, and a doctorate degree at the University of Zaragoza, Spain.