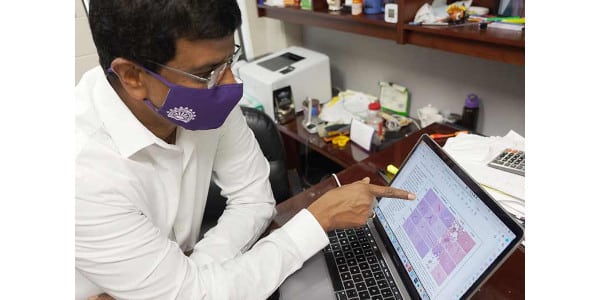 Roman Ganta and his team received a grant to help protect U.S. livestock from heartwater, a tick-borne disease. (Courtesy of Kansas State University)

MANHATTAN — Researchers at Kansas State University are the first in the United States to look into methods of keeping a foreign tick-borne livestock disease at bay.

The Center of Excellence for Vector-Borne Diseases recently received $250,000 from the U.S. Department of Agriculture and an additional $75,000 from the state of Kansas’ National Bio and Agro-Defense Facility Transition Funds to build upon past research into containing and controlling heartwater disease, which is caused by the tick-transmitted pathogen Ehrlichia ruminantium. Heartwater is deadly to cattle, sheep and goats.

Roman Ganta, professor of diagnostic medicine and center director, and his team recently published results of the first heartwater risk assessment experiments in sheep in the U.S. using several pathogen strains imported from sub-Saharan Africa. The new funding will extend collaborative research to further define pathogenesis and vector competence of ticks native to the U.S.

While heartwater originally was identified as a sub-Saharan African disease, it has been established in several Caribbean islands, posing a potential threat to the U.S. cattle industry.

“The possible introduction of heartwater from the Caribbean and through imported exotic foreign animals from Africa is a major concern to the US food animal industry,” Ganta said. “The USDA-estimated cost of heartwater could be as high as $2.3 billion in losses to the U.S. economy.”

The disease is characterized by fever, labored breathing, coughing, neurological signs, hydrothorax, ascites and edema of the lungs. High mortality rates up to 90% can occur in livestock if introduced into a non-endemic area, such as to the mainland U.S.

“Despite its enormous importance, effective means of diagnosing and controlling the disease are not available,” Ganta said. “Currently, there are no approved diagnostic tests or vaccines for heartwater disease in the U.S. The far-reaching goals of our heartwater research are to develop rapid diagnostics and a vaccine.”

The project will be the first to have strategic collaborations with the USDA and NBAF. Among its goals are to establish future collaborations with researchers in the Caribbean and Africa. Developing better methods of controlling heartwater will be critical in improving food animal health and the economies in sub-Saharan Africa and parts of the Caribbean where the disease is widespread.