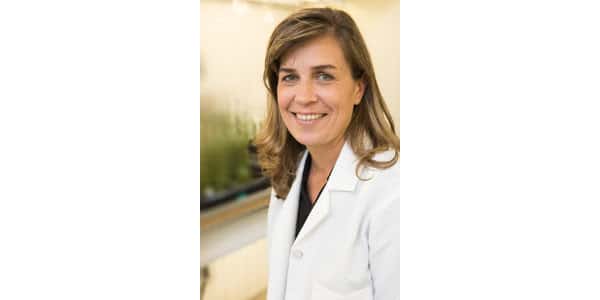 Melissa Mitchum, a molecular nematologist at the University of Georgia and co-leader of The SCN Coalition, will be working with breeders and other nematologists to study a new soybean variety with resistance derived from the breeding line PI 89772. (Courtesy of the SCN Coalition)

WAUKESHA, Wis. — A new soybean variety – with resistance to soybean cyst nematode (SCN) derived from the breeding line PI 89772 – is being released by Syngenta in small quantities in 2020. Syngenta is sharing seed with university researchers and farm cooperators now, and full commercial launch is coming next year.

“We’re excited about a new soybean variety with a source of SCN resistance derived from breeding lines other than PI 88788 and Peking,” says Melissa Mitchum, molecular nematologist at the University of Georgia and co-leader of The SCN Coalition. “If the new variety has the right combination of resistance genes, it could offer a novel mode of action that shifts SCN populations in a different direction than the PI 88788 breeding line and possibly the Peking breeding line, too.”

Mitchum says earlier research by herself and her predecessors at the University Missouri showed promise for PI 89772 resistance. “It showed that if you have an SCN population that’s highly virulent (able to feed and reproduce) on PI 88788, the population drops significantly when you test it on PI 89772. We showed a similar response to the breeding line PI 90763. We are looking more at this in collaboration with soybean breeders.”

Including PI 89772 in checkoff-funded research

These findings dovetail with a research project funded by the soybean checkoff via the North Central Soybean Research Program (NCSRP) and headed by Mitchum. For the project, Mitchum and her co-principal investigators are working to:

“We just finished the first year of a three-year microplot field study,” Mitchum explains. “We’re planting different SCN-resistance gene stacks or pyramids in different rotations, including PI 90763. We’re looking at SCN population densities, how they change based on the different SCN genetic resistance being deployed and how the HG type of the SCN populations shifts over time.”

Meanwhile, a graduate student at Iowa State University, Nicole Deitloff, who is also an NK seed sales representative, will be testing Syngenta’s new variety on four Minnesota farms in 2020. She’ll be comparing it to varieties with PI 88788 and Peking SCN resistance, with and without Saltro™ seed treatment.

SCN Coalition co-leader Greg Tylka, a nematologist at Iowa State University and Deitloff’s graduate program advisor, encourages soybean growers to try the new Syngenta variety “if you can get your hands on it. We know SCN is chewing up PI 88788 resistance.”

How a new resistance source came to market

Aponte, the Syngenta soybean breeder who’s been working with PI 89772, says it’s been a long journey. “We’ve been collaborating with USDA and the University of Illinois for years, looking for sources of resistance other than PI 88788, which is 99% of what is being sold today.

“Because the original source of PI 89772 was from USDA germplasm, we initially had agronomic issues we had to overcome. First we needed to breed the performance and defensive packages into conventional soybean lines.

“Then we have to transition it to herbicide-tolerant lines, first Roundup Ready 2 lines, then Xtend, Enlist E3 and ultimately XtendFlex,” Aponte adds. “It takes time to develop a new herbicide trait, then move the other agronomic traits into a good bean. But SCN is a growing problem, and we want to be part of the solution.”

Mitchum’s ultimate goal with the NCSRP project includes “marrying our knowledge of resistance with our knowledge of different SCN populations so we can offer farmers prescriptive SCN management. Ultimately, we want to develop a rapid test to determine the SCN population in a soybean grower’s field that will help determine which genetic resistance to plant and which resistance rotation strategy to follow. We hope to make this a reality.”

The SCN Coalition is a public/checkoff/private partnership formed to increase the number of farmers who are actively managing SCN. Our goal is to increase soybean farmers’ profit potential and realize higher yields. Partners in The SCN Coalition include university scientists from 28 states and Ontario, grower checkoff organizations including the North Central Soybean Research Program, United Soybean Board and several state soybean promotion boards, and corporate partners including BASF, Bayer, Growmark, Nufarm, Pioneer, Syngenta, Valent and Winfield United.