Home » Nematode has potential to reduce cotton yields by 50% 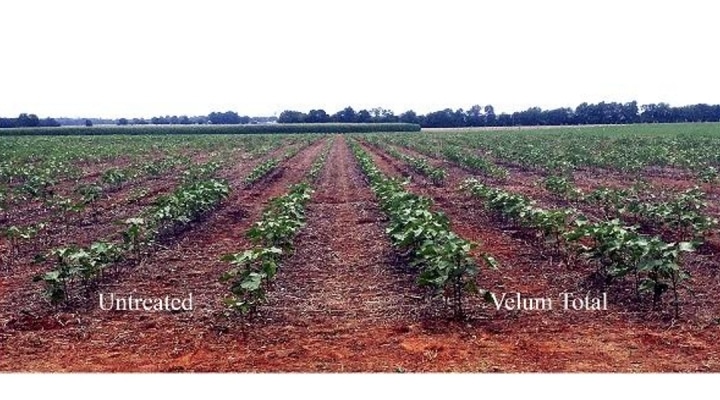 Trial plot containing Croplan 3885 B2XF cultivar 43 days after planting in 2018. The left two rows shown in the picture are the cultivar planted without the application of a nematicide. The right two rows were treated with an in-furrow spray of Velum Total (1.02 liters/ha) at the time of planting. (Photo: Kathy Lawrence)

AUBURN, Ala. — The reniform nematode is one of the most commonly found pests of cotton, with the ability to cause severe economic damage. In order to assess exactly how much damage the reniform nematode can cause, plant pathologists at Auburn University conducted a field trial comparing a clean field to a reniform-infested field.

To get the most accurate data, the plant pathologists began with one field experiencing the same conditions, including soil type and irrigation system. They then split the field in half, leaving a 10-foot grass strip in the center, and inoculated one side with the reniform nematode and left the other half clean. They planted ten cotton varieties on each half. They found that, averaged over two years, the cotton yields were 50 percent lower in the reniform field compared to the clean field.

They also experimented with the nematicide Velum Total and found it to be effective dependent on the environment. The nematicide supported a 55 percent increase in yield in 2017 but only 6 percent in 2018, in part due to the dry spring.

Lawrence advises growers to be careful not to allow the reniform nematode to establish in their fields. If they do discover nematodes, they should wash their equipment before moving to a clean field to prevent transfer.

EPA publishes proposed changes for herbicides used in cotton
May 22, 2022