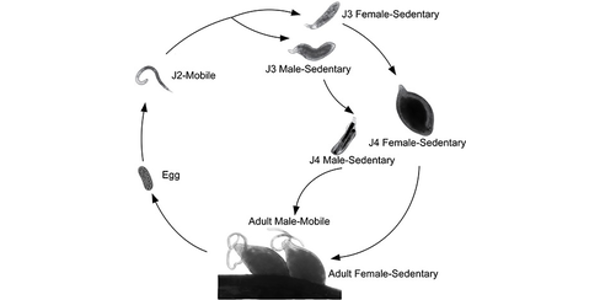 URBANA, Ill. — What can scientists learn about human neurodegenerative disease from a major soybean pest? It’s not a trick question; the answer lies in the soybean cyst nematode, one of two classes of microscopic roundworms known to lose and then regain mobility as part of their life cycle. A new study from the University of Illinois explains how it works.

“This is an animal that basically undergoes neurodegeneration, including nearly complete muscle atrophy, and then is able to reverse it in later development. From a human health perspective, I’m excited about the possibilities this could hold,” says Nathan Schroeder, assistant professor in the Department of Crop Sciences at the University of Illinois and corresponding author on the new study.

Schroeder and his research team took the foundational steps of documenting exactly how muscle and neurons degenerate in both male and female soybean cyst nematodes during their juvenile feeding stage. As the nematodes enter adulthood, males become mobile again, squirming through the soil in search of female mates. So the researchers described that, too.

“During loss of mobility, the muscles shrink and separate away from the cuticle, or exoskeleton. This is basically why they’re becoming paralyzed,” Schroeder says. “That was not known previously. We asked, ‘Was it just that they didn’t need to move once they started to feed? Or were there structural changes?’”

In addition to muscle atrophy, the researchers documented degeneration of neurons and a significant decrease of GABA, a critical neurotransmitter, both of which are associated with muscle activity in soybean cyst nematode. But as males began to enter adulthood, their GABA levels spiked. From there, muscle and associated neurons began to rebuild.

Applying these findings to human neurodegenerative disease may still be a long way off, but the research could lead to important practical outcomes for soybean pest management. Soybean cyst nematode is the among the worst soybean pests in the United States and the world, causing more than a billion dollars in yield loss annually. Exploiting this mechanism, which appears to be unique to soybean cyst and root knot nematode, another finding in the study, could be very good news for the soybean industry.

“The current control strategy is based on resistance of soybeans. However, the same source of resistance has been used for the past 30 years and nematodes are evolving around it,” Schroeder says. “But now that we know how males are able to rebuild their muscular system, we’re hoping we can figure out how to stop it in its tracks.”

The researchers suggest developing a control strategy that would target the GABA-binding receptors in soybean cyst nematodes, since the chemical appears to kick off the muscle restoration process in males. Because GABA receptors differ among animals, chemical control agents would have to be formulated for the soybean cyst nematode specifically. Keeping males from rebuilding muscle would prevent them from traveling to and inseminating sedentary females, essentially sterilizing the entire population.

The loss and subsequent recovery of mobility in soybean cyst nematode has been a mystery for years. Now that he’s solved it, Schroeder is hopeful that others will see the potential of these organisms as important research animals.

“They may be tiny, but these are animals and they are complex organisms,” he says. “Let’s not just think about the traditional model organism, the mouse, where you can simulate neurodegeneration in the lab. Instead, we can study what evolution has come up with in order to solve and reverse neurodegeneration.”

The article, “Immobility in the sedentary plant-parasitic nematode H. glycines is associated with remodeling of neuromuscular tissue,” is published in PLOS Pathogens [DOI: 10.1371/journal.ppat.1007198]. Authors include Ziduan Han, Sita Thapa, Ursula Reuter-Carlson, Hannah Reed, Michael Gates, Kris Lambert, and Nathan Schroeder, all from the University of Illinois. The study was funded by the National Institutes of Health (R01GM111566 to NES) and USDA’s National Institute of Food and Agriculture (ILLU-802-934 to NES).