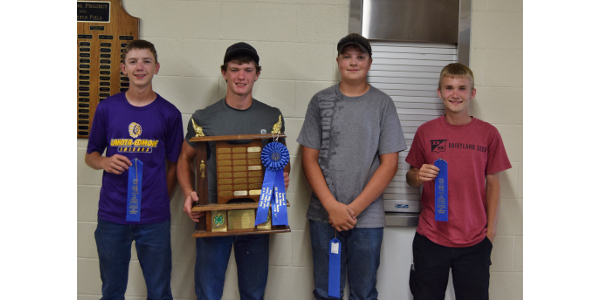 Placing first in the senior division of the state 4-H land judging contest was the team from Nelson County. Team members (from L to R) are: Jack Steffan, Roman Steffan, Torey Charles and Anthony Braun. (Courtesy of NDSU)

Team members are Roman Steffan and Jack Steffan of Michigan, and Anthony Braun and Torey Charles of McVille. The team is coached by Katelyn Hain.

Second place in the senior division was the team from Eddy and Foster counties. Team members are Nick Berglund of New Rockford, Maria Becker of McHenry and Natasha Lesmann of Carrington. The team is coached by Missy Hansen, Joel Lemer and Tim Becker.

The Walsh County team of Connor Hodek of Fordville, Andrew Myrdal of Edinburg, Erica Ralston of Mountain and Cody Chyle of Pisek placed third in the senior division. The team is coached by Brad Brummond.

The Foster County team of Kyle Johnson of Kensal, Molly Hansen and Cally Hansen of Carrington, London Davis of Glenfield, and Cyrena Kuss and Brekka Kuss of Woodworth placed first in the junior division of the state 4-H land judging contest. The team is coached by Missy Hansen and Joel Lemer.

The Grand Forks County team of William Stover, Max Hoverson, Tucker Stover and Phoebe Stover, all of Larimore, placed second in the junior division. The team is coached by MaKayla Heinz and Tyler Stover.

The land judging contest consists of four sites. Each site includes a pit for the contestants to examine the soil profile and characteristics. Information on the soil depth history, present crop use, cropping plan and fertility levels is provided. Participants use this information to estimate slope and potential erosion factors to determine land class and recommendations for management of the soil.