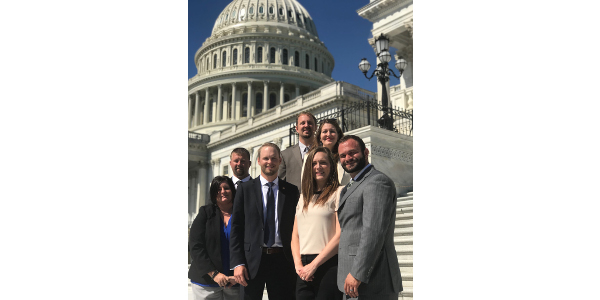 LINCOLN — Young farmers and ranchers tend to feel the weight of agriculture’s challenging times sooner than those who have been in the business for a while. Trying to manage the daily talk of international trade disputes, farm bill debates, the back-and-forth battles over ethanol mandates, low crop prices, high overhead costs, and tight or nonexistent profit margins. But despite all these challenges, members of the Nebraska Farm Bureau Young Farmers and Ranchers Committee, who attended a national affairs trip to Washington, D.C. July 16-18, are optimistic about their future in agriculture.

“Right now, you are seeing good corn and soybean crops, so it’s not uncommon to see lower commodity prices at this time. At the same time, the current trade situation is also likely having an impact. Despite all of this, we remain cautiously optimistic President Trump will be able to score a few victories as he works through our nation’s trading relationship with the rest of the world,” John Temme, youth at-large member of the NEFB board of directors said July 20. Temme farms and operates a dairy farmer near Wayne.

Nebraska Farm Bureau works to equip young farmers and ranchers in Nebraska to lead effectively and advocate for positive change in agriculture, by sharing personal stories of how decisions made in Washington, D.C. effects their farms and ranches.

“We had a good and diverse group that visited with our Nebraska delegation bringing a lot of perspective to the issues facing agriculture today,” Steve Nelson, president of the Nebraska Farm Bureau said. “There is support for President Trump’s efforts in doing the right thing on trade, but the longer the current situation remains unsolved, the greater the concern grows among young farmers and ranchers,” Nelson said.

While the group’s main message was one of hope to make countries like China play fair in trade, they also stressed that there needs to be a quick resolution to these trade disputes.

“Those in agriculture who stand to lose the most from a trade war are young farmers and ranchers who have not built up a lot of equity in their farms and ranches, since they are just getting started. The administration needs to show it can conclude trade negotiations and pass a Farm Bill. If the U.S. can finalize an agreement with both Canada and Mexico and get a farm bill passed by the end of September, it would go a long way toward calming the unease in the countryside,” Temme said.

Another issue front and center during the trip was showing their support of updating and improving the Endangered Species Act (ESA). A number of bills were introduced in the House that are critical to the success of meeting the law’s intent — to protect and recover imperiled species and the eco-systems upon which they depend.

“We have someone in the White House that wants to help farmers and ranchers instead of constantly creating red tape and regulating what we do on our operations. We hope we can build some momentum over the next several months in order to finally make some needed changes to the ESA,” Temme said.

Another issue gaining a lot of attention in Washington is the future of lab grown meats. Agencies in the government are divided on who should have ultimate responsibility for regulation of this product. Both Food and Drug Administration (FDA) and United States Department of Agriculture (USDA) regulators assert that they have jurisdiction over the products and publicly argue over that responsibility.

“We have concerns with how this product is labeled and who in the federal government should regulate it. As things move forward in Washington, we hope our USDA rather than FDA has the final say as USDA has a better history of being friendlier to agriculture,” Temme said.

While the list of challenges young farmers and ranchers face is long, the need for young people in agriculture to answer the call of growing food for our nation and world remains as strong as ever. “Continuing to communicate our message to key decision makers is vital to the future success of our nation as well as for farm and ranch families,” Nelson said.