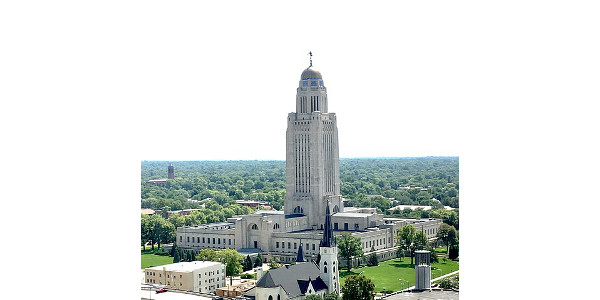 Nebraska farmers and ranchers will have greater assurances that investments made to grow and expand their farm and ranch operations are not subject to the whims of frivolous nuisance lawsuits due to the Legislature's passage of LB 227, May 2. (Capitolist [CC BY-SA 4.0], via Wikimedia Commons)

LINCOLN — Nebraska farmers and ranchers will have greater assurances that investments made to grow and expand their farm and ranch operations are not subject to the whims of frivolous nuisance lawsuits due to the Legislature’s passage of LB 227, May 2. The bill was introduced by Sen. Dan Hughes of Venango at the request of Nebraska Farm Bureau and other agriculture groups to boost protections for farms and ranches against nuisance related suits that have plagued farmers and ranchers in other states. LB 227 is one of Nebraska Farm Bureau’s priority bills for the 2019 legislative session.

“We’ve watched farmers come under fire in other states as anti-modern agriculture activists fund nuisance lawsuits seeking monetary awards. We’ve seen those type of frivolous suits end multi-generational farming operations, because someone moved into an agriculture area and decided they didn’t like many normal characteristics of farms and ranches such as dust and odors,” said Steve Nelson, Nebraska Farm Bureau president. “Agriculture is our state’s largest industry and a major contributor to our state’s economy. Our farms and ranches are too important to allow that type of activity to happen here. This is a win for agriculture and a win for Nebraska.”

The bill passed builds on Nebraska’s “Right to Farm” law which is meant to protect farms and ranches from someone moving into the neighborhood and filing a lawsuit against the operation because they don’t like the dust, odor, smell, noise, or other agriculture-related realities of living in an agricultural area. LB 227 continues agriculture’s “first in time” protections, but further establishes a statute of limitation so a change in farming practices could only be considered a nuisance if the individual or entity files a nuisance lawsuit within a two-year window of claiming a nuisance situation exists.

“To stay viable, our members need to have the flexibility to make investments and changes in their operations. In some cases, that means being able to add livestock to their operation so they can bring their son or daughter home to the farm. We believe they should be able to do that without being fearful of nuisance suits that have been successfully used against farmers in other states. LB 227 is an important step to help offer that protection,” said Ansley Mick, Nebraska Farm Bureau director of state governmental relations. “We thank Sen. Hughes, Sen. Lathrop, and the members of the Legislature for pushing this bill across the finish line.”

LB 227 advanced with 46 yes votes, two no votes, and one present, not voting. The bill will now go to Governor Ricketts for final approval.