Home / Ohio / Need farm workers? It could get easier 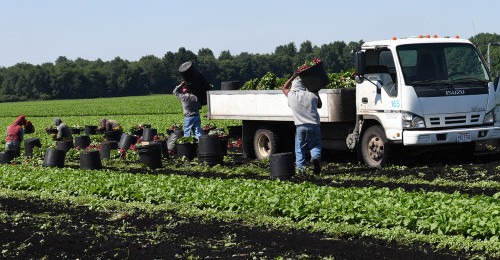 COLUMBUS, Ohio — Hiring migrant farm workers will become cheaper and easier as a result of several upcoming changes to the process, according to a labor economist with The Ohio State University.

The new rules on getting visas for temporary foreign workers will allow agricultural employers to pay migrant workers an hourly wage based on what other domestic workers employed in the same position in the area are paid.

“That should help keep costs down for farmers,” said Joyce Chen, an associate professor in Ohio State’s College of Food, Agricultural, and Environmental Sciences (CFAES).

The rule changes are scheduled to go into effect Oct. 21.

The current formula for calculating wages requires farms to average the hourly wages of both U.S. supervisors and their field workers to generate an hourly wage for temporary foreign workers in a county.

So, if a domestic lettuce picker in Sandusky County is paid $10 an hour and a supervisor is paid $15 an hour, the temporary migrant worker not in a management position has to be paid at least $12.50 an hour, the average of those two hourly wages.

“The new rules will allow farmers to hire temporary migrant field workers for less than they do now,” Chen said. “But they’ll still be required to pay a wage in line with what domestic workers doing the same job get.”

“The changes to the rules on wages for migrant workers will create more opportunities for both workers and employers to operate through official channels,” said Chen, who works in CFAES’ Department of Agricultural, Environmental, and Development Economics (AEDE).

Employers seeking to hire migrant laborers have to apply for an H-2A visa for each person they hire. That visa allows a migrant laborer to work on a U.S. farm for up to a year.

Currently, farms have to hire U.S. qualified workers that seek the work for at least half of the duration of the visa. So, if a farm owner pursues a six-month visa for a migrant worker to plant peppers in Huron County, he or she has to hire all qualified and willing U.S. workers for the first three months.

The change to 30 days might not be advantageous for domestic farm laborers, Chen said.

“Workers seeking jobs later in the season, after the first 30 days, are more likely to find that no positions are available,” she said.

Scott Witten, an owner of Witten Farm in southeast Ohio’s Washington County, expects the changes will help his business. Since 2011, he has hired migrant laborers annually through the H2-A program to help the business, which sells produce at roadside stands in central and southeast Ohio.

“The government sees that reform is needed. We’re excited about that,” said Witten, a 2008 graduate of CFAES.

He called the changes a “first step” in reforming the process.

“It puts those who chose to pay the higher rate at a disadvantage when it comes to selling their product,” he said.

Administrative changes to the H-2A visa process will likely make it easier for farmers to apply for the visas, Chen said.

Under the new rules, agricultural employers will have to file only one application to hire temporary workers, even if they bring on crews at different times in the season. The current system requires a farm owner to file a separate H-2A visa application each time he or she wants another set of workers, even within the same growing season.

The new process also requires that all applications be filed electronically rather than through paper applications, which typically take longer to process.

“Overall, this will be positive for farmers and will help streamline some of the bureaucracy for  hiring migrant workers, as well as give them more flexibility in hiring throughout the season,” Chen said.