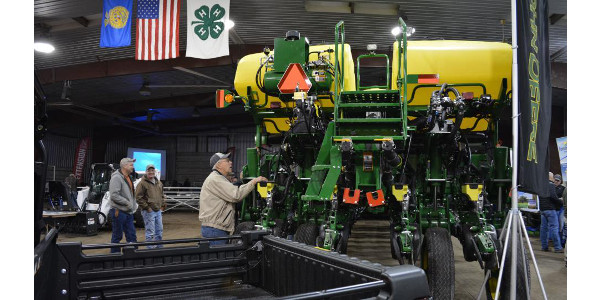 Growers can get the latest research updates for soybeans as well as view machinery and commercial exhibits at the Nebraska Soybean Day and Machinery Expo Dec. 14 in Wahoo. (Courtesy of UNL)

WAHOO, Neb. — The 2017 Nebraska Soybean Day and Machinery Expo will assist soybean producers in planning for growing season. The expo is 8:30 a.m. to 2:15 p.m. Dec. 14 in the pavilion at the Saunders County Fairgrounds in Wahoo.

The expo opens with coffee, doughnuts and the opportunity to view equipment and exhibitor booths. Speakers start at 9 a.m. and include university researchers and specialists, Nebraska Soybean Checkoff representatives, soybean growers and private-industry representatives.

“We are bringing back Jason Norsworthy due to the popularity of his presentation last year,” said Nebraska Extension Educator Keith Glewen, who coordinates the expo. “This year he is going to focus on a topic that has gained widespread attention and is on the mind of most growers – dicamba.”

Norsworthy is the chair of weed science at the University of Arkansas. He will discuss issues associated with dicamba use, including likely causes for non-target damage based on field observations of weed scientists across the United States. Norsworthy will highlight research on off-target movement of the new, lower-volatility formulations of dicamba. He will also provide input on ways to minimize the likelihood for damage from off-target dicamba movement.

Also on the agenda is Michael Swanson, a Wells Fargo agricultural economist. Swanson believes growing top-yielding soybeans requires the right inputs. His talk will focus on getting crop metrics right.

Chris Proctor, weed management educator with Nebraska Extension, is a strong proponent of measuring herbicides accurately for successful weed control in soybeans. He will discuss how accurate measurements are often overlooked in the big picture of herbicide resistance.

Other expo topics include an update on the Nebraska Soybean Checkoff and association information; visits with representatives from seed, herbicide, fertilizer and equipment companies; and viewing of new farm equipment.

A complimentary lunch will be served at noon.

Registration is available at the door the day of the expo. Registration is free, but the Saunders County Soybean Growers Organization requests donations of one or more cans of nonperishable food to the food pantry.

For more information about the program or exhibitor details, call 800-529-8030 or email kglewen1@unl.edu. Information is also available at https://enre.unl.edu/nebraskasoyexpo.

The program is sponsored by Nebraska Extension in the university’s Institute of Agriculture and Natural Resources, the Nebraska Soybean Board, Saunders County Soybean Growers Organization and private industry.

Sugarbeets as a livestock feed for weaned calves