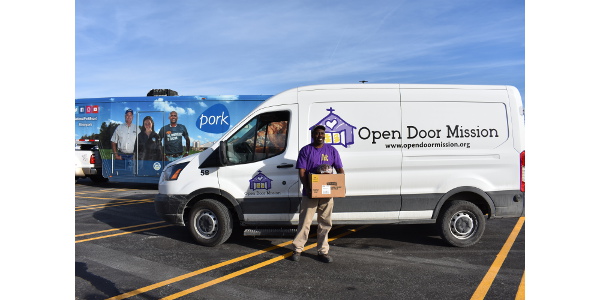 “Paying It Forward." (Courtesy of The Nebraska Pork Producers Association)

LINCOLN — Food is essential. It’s fun. It’s therapeutic. But for some, it can be a luxury. During the holiday giving season between “Giving Tuesday” and Christmas this year, the pork industry called on its friends to come together to “pay it forward” with pork through the Hams Across America program.

The program was created in 2016 to draw attention to the way pig farmers serve their communities year-round through food bank donations, raising funds and preparing meals for those in need. Or, as the name suggests, giving a holiday ham to neighbors and community outreach services. Hams Across America has grown rapidly, and in 2018 this program raised more than a half million pounds of donated pork nationwide–or about 2.2 million servings!

The Nebraska Pork Producers Association continued its commitment to the program in 2019 by donating approximately 2,700 pounds of ham to organizations across Nebraska. In the past, donations have gone entirely to the Lincoln and Omaha areas, but due to the generosity and matching funds provided by the Iowa Pork Producers Association, Nebraska distribution was expanded to include Grand Island, Hastings, Kearney, Columbus, Fremont, Norfolk and Broken Bow.

NPPA President Tim Chancellor enthusiastically supported Hams Across America activities and even donated half of the Broken Bow hams himself. “These organizations do so much to fight hunger in our Nebraska communities,” he said, “that it feels terrific to offer an assist by donating some of the high-quality pork products we produce here in Nebraska.”

The hams were purchased through Sam’s Club in Omaha, and Cedar Hollow Hams and Hy-Vee in Grand Island. The National Pork Board’s pork trailer was on hand in Omaha December 19 to help distribute the hams there and to help raise awareness for the promotion.

The Nebraska Pork Producers Association is grassroots, incorporated, non-profit organization established in 1961. NPPA was developed to promote the pork industry through the enhancement of consumer demand, producer education and research. For more information, visit NPPA’s website at www.NEpork.org.