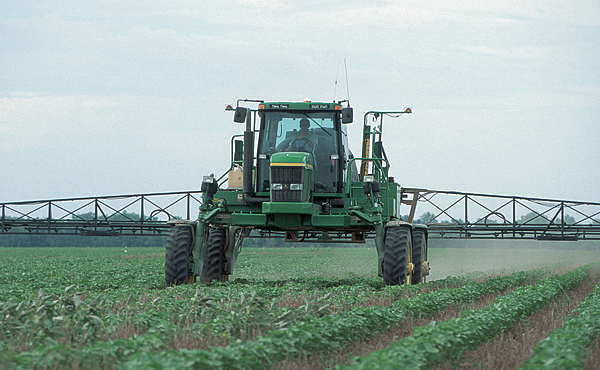 NEFB estimates, that in Nebraska, glyphosate was the most used crop protection product on corn and soybeans in 2020, according to the 2018 application data from the U.S. Department of Agriculture (USDA). (Courtesy Wikimedia Commons)

LINCOLN, Neb. — Nebraska Farm Bureau (NEFB) delivered a message to the Environmental Protection Agency (EPA) that glyphosate, with its decades of data backing its effectiveness and safety, should be reregistered as a crop protection product. In comments submitted to the agency on their draft biological evaluation for glyphosate, NEFB underscored how important the product is to Nebraska farmers and ranchers.

Nebraska Farm Bureau stressed that making glyphosate unavailable would unquestionably compromise the rapid growth of conservation-based no-till soil practices. The 2017 Census of Agriculture revealed no-till farming in Nebraska as a preferred conservation management practice in 2017 at 10.25 million acres, up nearly 1 million acres since 2012.

“No-till conservation is enabled by using glyphosate, and these practices help to conserve soil, preserve and increase nutrients, improve water quality, trap excess carbon in the soil, and reduce greenhouse gas emissions. Without access to effective weed management tools, farmers would be limited in their abilities to improve soil health and continue being good stewards of the land,” Mark McHargue president of the Nebraska Farm Bureau said.

NEFB estimates, that in Nebraska, glyphosate was the most used crop protection product on corn and soybeans in 2020, according to the 2018 application data from the U.S. Department of Agriculture (USDA).

“Any effort by EPA to make glyphosate unavailable would directly and negatively affect thousands of our members, increasing their costs of production, potentially reducing yields, and harming their profitability. NEFB strongly supports the continued use of glyphosate and urges the agency not to prohibit or restrict its availability and use,” McHargue said.

The Nebraska Farm Bureau is a grassroots, state-wide organization dedicated to supporting farm and ranch families and working for the benefit of all Nebraskans through a wide variety of educational, service and advocacy efforts. More than 58,000 families across Nebraska are Farm Bureau members, working together to achieve rural and urban prosperity as agriculture is a key fuel to Nebraska’s economy. For more information about Nebraska Farm Bureau and agriculture, visit www.nefb.org.