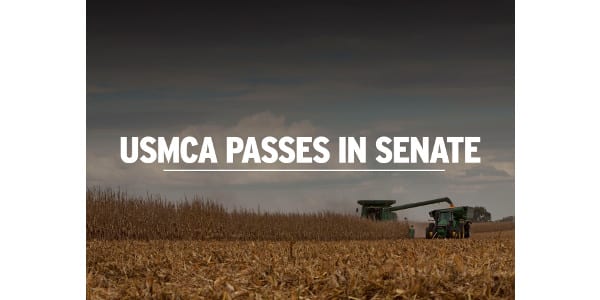 With an overwhelming majority, USMCA passed through a Senate vote on Jan. 16, 2020. (Courtesy of Nebraska Corn)

LINCOLN — The future of Nebraska’s corn industry is bright following the Senate’s passage of the much-anticipated trade agreement between the United States, Mexico and Canada. The Nebraska Corn Board (NCB) and the Nebraska Corn Growers Association (NeCGA) issued statements today regarding the approval of the United States-Mexico-Canada Agreement (USMCA).

“Ever since President Trump announced his intent to withdraw from NAFTA, one of our top priorities has been a modernized agreement that continues to have a positive impact on Nebraska agriculture,” said Dan Nerud, president of the NeCGA and farmer from Dorchester. “We’re extremely appreciative of our farmer members who helped bring USMCA to the finish line. We’d also like to thank Sen. Deb Fischer and Sen. Ben Sasse for their unwavering support on this key piece of legislation.”

“The fact that USMCA received overwhelming bipartisan support from the House of Representatives last month and overwhelming bipartisan support from the Senate today just emphasizes the importance of free trade with Canada and Mexico,” said David Bruntz, chairman of the NCB and farmer from Friend. “Because of USMCA, Nebraska’s corn farmers and ethanol producers will continue to have access to our biggest and most dependable markets.”

Nebraska Corn looks forward to the full implementation of this important trade legislation.

Use the numbers (correctly) this bull sale season