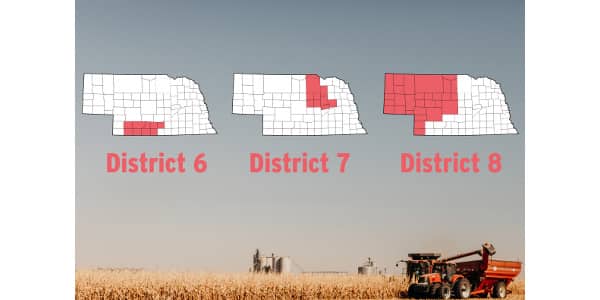 LINCOLN — Notice is hereby given that the terms for three members of the Nebraska Corn Development, Utilization and Marketing Board, also known as the Nebraska Corn Board, will expire June 30, 2021, and Nebraska’s corn checkoff program is seeking candidates to petition for those districts. The open positions represent Districts 6, 7 and 8.

“Through my years serving on the Nebraska Corn Board, I was able to take an active role in shaping demand opportunities and adding value to our state’s corn industry,” said David Merrell, current District 7 director and farmer from St. Edward. “By the end of my term, I will have represented District 7 for 15 years. I enjoyed my time on the board and encourage farmers from these open districts who are passionate about the future of the corn industry to consider submitting petitions.”

Appointments to the board for these three district directors are made by the Governor of Nebraska. Any candidate seeking appointment may place his or her name on the candidacy list by filing a petition with the Nebraska Corn Board. Qualified candidates include those individuals who are citizens of Nebraska, are at least 21 years old, have been actively engaged in growing corn in Nebraska for a period of five years and derive a substantial portion of their income from growing corn. Board members who currently represent these districts are also eligible to re-petition.

Petitions may be obtained by writing the Nebraska Corn Board (P.O. Box 95107, Lincoln, NE 68509-5107), by calling 800-632-6761 or emailing nikki.bentzinger@nebraska.gov. A candidacy petition must carry the signatures of at least 50 corn producers from that district. All petitions must be received by the Nebraska Corn Board no later than 5:00 p.m. Central Time on Friday, May 21, 2021.  Faxed copies do not qualify.