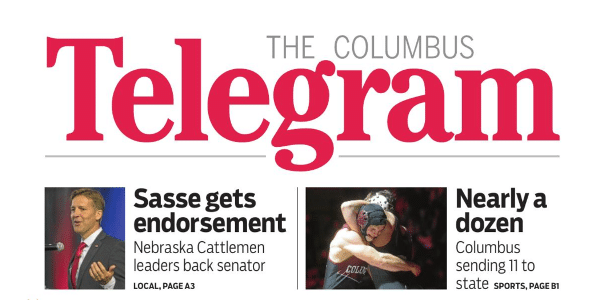 U.S. Sen. Ben Sasse recently earned the endorsement of the future, current and immediate past presidents of Nebraska Cattlemen, including  one from the Columbus area.

COLUMBUS, Neb. — U.S. Sen. Ben Sasse recently earned the endorsement of the future, current and immediate past presidents of Nebraska Cattlemen, including  one from the Columbus area.

“I’m proud to have the support of cattlemen across Nebraska, and I’m proud to fight for them in Washington. Nebraska runs on the hard work of our ag industry,” Sasse said, in a provided statement. “Our ranchers feed the world — that’s a big job, but Nebraska gets it done. Our farm and ranch families deserve the best because they produce the best.”

Mike Drinnin, the owner/manager of Drinnin Feedlots Inc. and Drinnin West Cattle Co., is the immediate past president of the Nebraska Cattlemen. He praised Sasse for his efforts.

“Ben Sasse stood up to fight for President Trump’s USMCA trade deal and introduced livestock haulers legislation that pushed back against overly strict regulations and maintained safety on our roads,” Drinnin said. “That stuff matters to Nebraska’s producers — and that’s why cattlemen across our state are supporting Ben Sasse for U.S. Senate.”

The Nebraska Cattlemen association serves as the representative for the state’s beef cattle industry and represents professional cattle breeders, ranchers and feeders, as well as county and local cattlemen’s associations. Its headquarters are in Lincoln.

“Washington has a lot to learn from Nebraska — and Ben Sasse makes sure they’re listening to us. We’re the best in the world at what we do, and Ben has worked hard to put Nebraska ag — and our producers — first,” he said. “He fights for us, we’ll fight for him.”

“Nebraska’s cattlemen and women spend our lives raising the absolute best beef in the world. It’s pretty simple: we want less government interference and a whole bunch more trade,” he said. “Ben Sasse gets that and fights for us.”