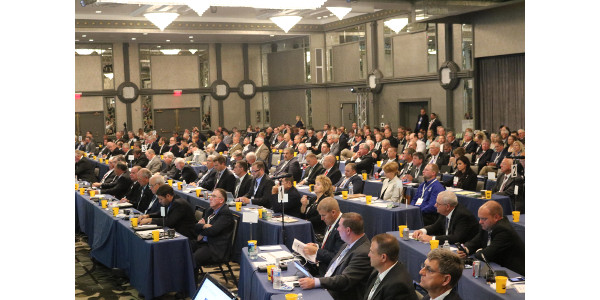 Corn farmer delegates from around the country attend the biannual Corn Congress to shape ag policy for the corn industry. (Courtesy of Nebraska Corn Board)

WASHINGTON — Corn leaders from across the country met in Washington, D.C. last week for the biannual Corn Congress hosted by the National Corn Growers Association. During Corn Congress, more than 100 farmer-delegates gathered in the nation’s capital to discuss policy for U.S. corn production. Due to the downturn in the ag economy, much of the discussions focused on international trade, ethanol expansion and the need to pass a new Farm Bill.

“Corn Congress is a time for all U.S. corn farmers to come together to address the heavy hitting issues related to corn production,” said Dave Merrell, chairman of the Nebraska Corn Board and farmer from St. Edward. “By coming together, we’re able to focus and refine our policies, which strengthens our individual voices as farmers. What we’ve discussed over the last couple of days may have implications on corn farming for years to come, so we took the time to get it right.”

This year’s Corn Congress began Wednesday, July 18 and concluded on Thursday, July 19. Throughout the two days, delegates participated in policy discussions and also visited with congressional leaders on Capitol Hill. Prior to the beginning of Corn Congress, farmers engaged in action team meetings on Monday, July 16 through Tuesday, July 17 to discuss a variety of issues impacting the U.S. corn industry.

“By taking the time to address key issues, such as consumer engagement, freedom to operate, or corn productivity, we’re able to be more effective in enhancing our country’s corn sector,” said Dan Wesely, president of the Nebraska Corn Growers Association and farmer from Morse Bluff. “As part of Corn Congress, we have the unique opportunity to share our ideas and our concerns with Nebraska’s congressional leaders. We’re also able to meet with congressional leaders who aren’t representing corn states. We’re hopefully bettering Nebraska and the U.S. corn industry in the long-term by providing these national representatives with accurate information to help them make decisions and shape policy.”

Join us at Williams IA for an Organic Field Day
August 3, 2022