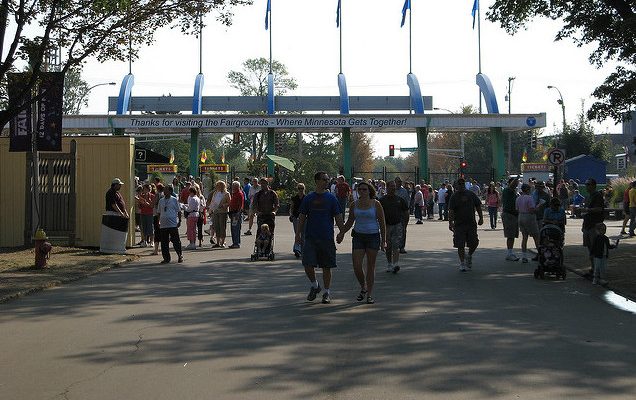 The Minnesota State Fairgrounds will get nearly $10 million in upgrades prior to the 2020 Great Minnesota Get-Together, continuing a decade-long trend of major facilities work. (Steve Moses via Flickr)

ST. PAUL — The Minnesota State Fairgrounds will get nearly $10 million in upgrades prior to the 2020 Great Minnesota Get-Together, continuing a decade-long trend of major facilities work. The State Fair’s board of managers approved a record $5.1 million in maintenance projects and another $4.5 million in capital work for ’20 during the annual meeting of the Minnesota State Agricultural Society, governing body of the State Fair. The Society’s meetings were held Jan. 17-19 at the DoubleTree Hotel in Bloomington as part of the annual joint conventions of the Society, Minnesota Federation of County Fairs and Midwest Showmen’s Association.

The trend continues in 2020 with improvements and maintenance projects scheduled for every corner of the 322-acre State Fairgrounds. Included are the renovation of the building located at 1640 Como Avenue (purchased by the fair in 2018) to include a new year-round ticket office, improvements to every building in the State Fair’s livestock complex, upgrades to State Fair utilities and communications systems, and scores of painting, landscaping, building improvements and utilities projects across the fairgrounds.

Also included are changes at entrance gates to accommodate fair-time metal detectors. “We’ve looked at adding metal detectors to our public safety program for a while now,” said State Fair General Manager Jerry Hammer. “We added bag checks in 2016, and this is the next step in maintaining a safe and secure environment.” All projects will be funded through State Fair operating revenue and grants from the Minnesota State Fair Foundation. The fair is financially self-supporting and receives no government aid of any kind.

The fair’s board of managers also approved admission prices for the 2020 fair, Aug. 27 through Labor Day, Sept. 7, which will remain unchanged from 2019. Regular gate admission for adults 13-64 is $15; kids 5-12 and seniors 65+ are admitted for $13; children 4 and under are always admitted free. Pre-fair discount admission tickets on sale through 9 p.m. Aug. 26 for all ages are $12. Pre-fair discount admission tickets are currently on sale at mnstatefair.org.

In other business conducted during the meeting, Ron Oleheiser of Grand Rapidswas elected president of the Society. Ray Erspamer of Hibbing was elected to fill Oleheiser’s two-year unexpired term as manager of the Society’s eighth regional district. D.J. Leary of Minneapolis was re-elected to a two-year term as State Fair board vice president, representing the fifth district. Gordy Toenges of Alden, Gail Johnson of Anoka and Joe Scapanski of Sauk Rapidswere each re-elected to three-year terms representing the Society’s first, third and sixth districts respectively.

Retired Minnesota State Fair Attorney Kent Harbisonwas inducted as the newest member of the Minnesota State Fair Hall of Fame. The fair’s Hall of Fame was founded in 1966 to recognize individuals whose outstanding service has had a lasting impact on the Great Minnesota Get-Together. Harbison served as the fair’s attorney from 1976 until his retirement in 2017. In 1981, Harbison was a lawyer with the Minnesota Attorney General’s office when he represented the State Fair before the United States Supreme Court in a landmark free speech and freedom of religion case. The court’s decision affirmed the State Fair’s authority to limit certain activities to assigned exhibit space, and the case continues to be cited in constitutional law textbooks today. After his service in the Attorney General’s office, Harbison joined the Fredrikson & Byron law firm where he continued to represent the State Fair while earning awards in health law and pro bono work.

Retired Society Board President Paul Merkins of Stewart, Minn., was elected to honorary life membership in the Society. Merkins served on the State Fair board of managers since 2009, serving the past two years as president. Merkins is a crop farmer who has also served in various roles for McLeod County Fair since 1975. He has served on the board of the Minnesota State Poultry Association since 1996, where he is currently the president, and serves as Lynn Township Board Chairman and Vice Chairman of the McLeod County Planning Advisory Commission. He was awarded the 2015 Minnesota Federation of County Fairs’ District 2 Fair Person of the Year, the 2016 International Association of Fairs and Expositions’ Heritage Award for outstanding community service and the 2017 Hutchinson Area Chamber of Commerce Ag Person of the Year.

The State Agricultural Society is made up of delegates from each of the state’s 87 county fairs, plus representatives of 43 statewide associations involved in agriculture, horticulture and education. The Society is a quasi-state agency charged exclusively with the production of the annual Minnesota State Fair and management of the historic 322-acre State Fairgrounds.

When you inherit the farm from your children

How to take and interpret basal stalk nitrate test
September 21, 2020

Farm safety and health in the spotlight
September 21, 2020

Celebrate all things Texan with the State Fair of Texas from home
September 10, 2020