Home » Near 2 million acres on fire in the United States 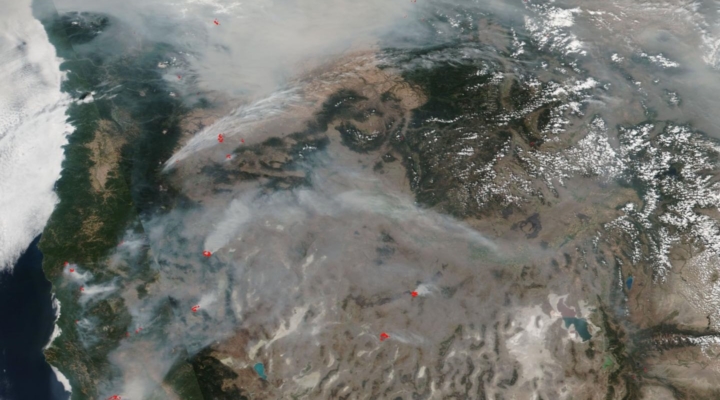 The West Coast of the United States is shrouded in smoke from the 110 large fires (this does not include smaller fires within each complex of fires) that have erupted across the region during this fire season. Over 1.9 million acres are or have been ablaze. Six new large fires were reported in Idaho, Nevada and Oregon over the weekend and eight large fires have been contained including the Ferguson Fire near Yosemite National Park in California. (NASA image courtesy NASA/Goddard Space Flight Center Earth Science Data and Information System (ESDIS) project.)

SACRAMENTO — The West Coast of the United States is shrouded in smoke from the 110 large fires (this does not include smaller fires within each complex of fires) that have erupted across the region during this fire season.

Over 1.9 million acres are or have been ablaze. Six new large fires were reported in Idaho, Nevada and Oregon over the weekend and eight large fires have been contained including the Ferguson Fire near Yosemite National Park in California.

The weather concerns in the area include warmer than average temperatures that will continue in the west with diurnal winds and marginal overnight humidity recoveries. Isolated storms will be possible along and west of the Continental Divide in Montana and Wyoming. These storms could also bring more lightning strikes and more blazes to the area with increasingly dry conditions. A breezy easterly flow will blow across the western half of Montana and possibly northern Idaho that could possibly allow fires to spread farther. With the center of the high pressure area located mostly over southern California, the normal wind flow will be suppressed and the rain that might come to this area will be contained mainly in areas near the Mexican Border certainly not helping firefighting efforts. Further north, low pressure will bring cooler temperatures and possibly isolated storms to the Pacific Northwest.

National Preparedness Level is at the highest level of 5. This level includes national mobilization heavily committed to fighting active fires and taking measure to support these geographic areas that are on fire. Taking emergency measures to sustain incident operations on active fires. Providing ongoing full commitment of national resources. Filling resource orders at the National Interagency Coordination Center by coordinating requests with Geographic Area Coordination Centers as resources become available. Recognizing that the potential for emerging significant wildland fires is high and expected to remain high in multiple geographic areas.

Smoke from these fires have traveled along the west to east jet stream and are bringing that smoke across the country as far as the East Coast. NOAA’s High-Resolution Rapid Refresh-Smoke (HRRR-Smoke) air quality modeling system is a web-based system that runs in real time and also is predictive of where the smoke may travel taking into account the movements the atmosphere normally takes following the laws of science and those can be calculated mathematically which produces a forecast. The HRRR-Smoke processes data from numerous sources, such as weather balloons, surface observations, aircraft, satellites and other atmospheric monitoring resources to approximate the physics, chemistry and dynamics of the atmosphere but at high resolutions on some of the most powerful computers in existence.

This image shows the current movement of the smoke across the U.S.:

This map (10am EDT on August 20, 2018) comes from NOAA and is an experimental model showing both upper level on near-surface smoke. This particular iteration of the map is showing the near-surface smoke (expressed in μg/m3) from the HRRR-Smoke Model. The Near-Surface Smoke overlays 10-meter wind data, expressed in knots. The colors represent the fire emitted fine particulate matter (fire smoke) concentrations at ~8 meters above the ground. The darker and redder the color the more concentration of smoke particulates are present. It is interesting to see how the smoke moves across the country traveling south as far as Texas and east as far as Quebec. When wind patterns change, of course, so does the smoke pattern. WTOP, a local radio station near Washington DC, reported that smoke from the California fires had reached the DC Metro area this past week. This map can be found here: https://rapidrefresh.noaa.gov/hrrr/HRRRsmoke/ This map can be used to either see the smoke currently or forecast where the smoke is predicted to move.

Smoke from any type of wildfire is dangerous. The smoke released by any type of fire is a mixture of particles and chemicals produced by incomplete burning of carbon-containing materials. All smoke contains carbon monoxide, carbon dioxide and particulate matter (PM or soot). Smoke can contain many different chemicals, including aldehydes, acid gases, sulfur dioxide, nitrogen oxides, polycyclic aromatic hydrocarbons (PAHs), benzene, toluene, styrene, metals and dioxins. The type and amount of particles and chemicals in smoke varies depending on what is burning, how much oxygen is available, and the burn temperature. Exposure to high levels of smoke should be avoided. Individuals are advised to limit their physical exertion if exposure to high levels of smoke cannot be avoided. Individuals with cardiovascular or respiratory conditions (e.g., asthma), fetuses, infants, young children, and the elderly may be more vulnerable to the health effects of smoke exposure.

NASA’s EOSDIS provides the capability to interactively browse over 600 global, full-resolution satellite imagery layers and then download the underlying data. Many of the available imagery layers are updated within three hours of observation, essentially showing the entire Earth as it looks “right now”. This natural-color satellite image was collected on August 19, 2018. Actively burning areas, detected by thermal bands, are outlined in red.