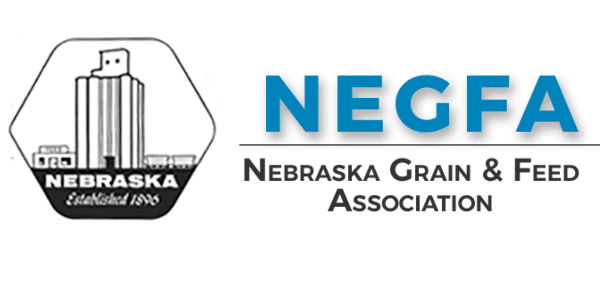 For 125 years, Nebraska Grain and Feed Association (NEGFA) members have seen quite an evolution, from horse and cart to semis and railroads, and from wooden elevators to large metal and concrete facilities and have shepherded Nebraska’s grain industry through the Great Depression and world wars.

LINCOLN — For 125 years, Nebraska Grain and Feed Association (NEGFA) members have seen quite an evolution, from horse and cart to semis and railroads, and from wooden elevators to large metal and concrete facilities and have shepherded Nebraska’s grain industry through the Great Depression and world wars.

Focused on representation
The original members of the then-Nebraska Grain Dealers’ Association recognized from the beginning the need for a national presence and helped start what is now known as the National Grain and Feed Association. These members had foresight and recognized that technology, trade, global supply chains, and global companies could be the reality of the future.

The agriculture industry has grown to be global, and so, too, have its consumers. As NEGFA member businesses broaden across state lines and across nations, their need for representation also broadens.

History of industry advancement
Grain dealers came together as the Nebraska Grain Dealers’ Association in 1896 to abide by a set of rules to govern the transaction of business and the promotion of friendly relations among legitimate grain men of the territory.

Over the next 125 years, the Association:
• Helped members with wooden elevators get insurance by offering a group rate insurance plan.
• Established standardized weights and encouraged installing and using “modern” scales among other elevators and the railroads.
• Hosted an Inter-state Grain Dealers Convention to address the nuisance of scoop shovelers and scalpers.
• Developed written contracts for future deliveries and encouraged members to use them in their business dealings.
• Gained consensus on the use of sieves made from window screen to sift dirt and foreign material from grain.
• Arranged to have a scale expert examine the country members’ scales.
• Cumulated and reported on area crop conditions, grain in stock, and any short weight issues encountered at destinations from members.
• With the help of other states, established a weighing bureau that would issue certificates on grain weighted under its supervision.
• Engaged in the development of futures trading and grain speculation — today’s commodity markets and the regulatory agencies with oversight.
• Educated and worked with state lawmakers to reform the Nebraska Grain Warehouse Law, which set standards for storage prices and created storage regulations to maintain grain quality.
• Prioritized regulations and legislation on railroad and trucking service to maintain grain quality and efficient transportation of products.
• Promoted grain quality standards with grain grading schools and education seminars to improve grain operations.
• Collaborated with other ag industry segment to review, analyze, and improve upon government pricing supports established during the 1940s.
• Supported international trade and worked on marketing and distribution challenges to encourage more trade.
• Started the Nebraska Wheat Research Foundation Board, known today as the Nebraska Wheat Board.
• Changed grain taxation from a volume to a handling basis.
• Offered a group insurance plan, one of the first of its type in Nebraska industry, which covered elevator workers who were hospitalized and provided surgical, accident, and death benefits.
• Worked with Kansas Grain and Feed Association to host public hearings on transportation issues and formed the Grain States Compact Committee with other Grain Belt states to get boxcars where they were needed.
• Staged the first Formula Feed Conference in 1950 with the University of Nebraska Agriculture College.
• Sponsored a feed control law for Nebraska.
• With the Extension service, created a poultry feed pamphlet, “The Egg-Mash Circular,” outlining recommendations. The collaboration between academia and industry gained national attention.
• Formed the Nebraska Grain Sanitation Council for education and inspection standards for all who handle grain, regardless of ownership.
• Educated the public and industry on grain quality and safety.

Celebrating and embracing change
Change is a constant process, and NEGFA is embracing change this year to transform and celebrate 125 years of supporting Association members with local, state, and national success.

With questions or comments, or for more information about the golf tournament, call 402-476-6174, email member.services@negfa.org or visit www.negfa.org/golf.