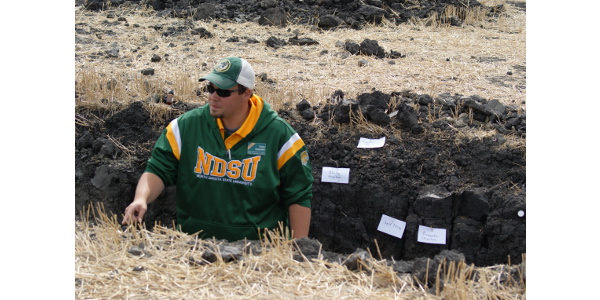 NDSU Extension soil health specialist Chris Augustin explains what is happening in the soil at this demonstration pit. (NDSU photo)

FARGO, N.D. — For more than 40 years, Walsh County producer Mark Hylden struggled with a 16- to 18-acre hourglass-shaped piece of land in the middle of a 70-acre field that never would produce a crop.

The following year, Hylden applied beet lime to the problem area at Kalwar’s suggestion. Beet lime is a byproduct of extracting sugar from sugar beets.

“I couldn’t believe my eyes,” Hylden recalls. “It was tilling up like beautiful black dirt in a garden.”

Following Kalwar’s recommendation, Hylden planted barley, and for the first time, a crop grew and thrived on the problem area. The field yielded 83 bushels per acre. Since then, Hylden has tried other crops, and they’ve grown, too.

Hylden’s sodicity problem is just one example of the soil health issues NDSU Extension soil health specialists and agents are helping producers combat throughout the state.

Salinity is another huge soil health problem in North Dakota. Salts prevent crops from taking up water and nutrients, which leads to yield losses.

As part of Extension’s efforts, soil health specialist Abbey Wick launched Soil Health Café Talks in 2014. Extension specialists, researchers and agents meet with producers in informal locations such as the local café or grain elevator to share information and learn from each other.

“Farmers want to see what others are doing and what we’ve learned,” Wick says. “We cover a range of issues farmers are managing on-farm. It’s been an excellent platform for an exchange of information.”

“It’s also a nice way for us to showcase the depth of knowledge we have at NDSU and the work we’ve been doing,” Wick says. “Plus, the ideas we get from the discussions help us keep our finger on the pulse of what farmers need to know more about.”

Demonstration plots are another way Extension specialists and agents have been using to show producers effective ways to improve their soil’s health.

“They give us an opportunity to show people what is happening in the ground in their backyard,” Kalwar says.

Kalwar focuses his efforts on working with producers to identify and assess their soil health issue, and find a solution. For sodic soils, that means applying a soil amendment, as in Hylden’s case. For saline soils, he recommends producers try growing salt-tolerant perennial grasses.

“The goal is to get something established there, some kind of vegetative cover,” he says. “These grasses will grow where nothing else will grow.”

Kalwar also works with Extension agents on sampling soil for producers to give them an accurate picture of what’s happening in their fields.

“Salinity can be reduced,” Augustin says. “It comes down to water management. It’s up to the producer to determine if they want to manage the water with cropping systems or drainage, but both methods are effective.

“The thing about managing salinity is it’s a lot like planting a tree,” he adds. “The best day to do it was yesterday. If you don’t manage your salinity today, it’ll be worse tomorrow.”

He calls the impact of the 2017 drought on the state’s salinity problem a double-edged sword.

“To remove salts, you need to dry the soil,” he says. “However, you need precipitation to leach salts.”

“Twitter has been a major tool for getting information to farmers,” Wick says.

For Wick, the next steps include continuing to provide information through Café Talks and events such as the Midwest Cover Crops Council’s annual meeting and Conservation Tillage Conference, both of which will be held in Fargo this year, and a two-day bus tour in July.

Kalwar plans to concentrate on educating producers about the importance of sampling the soil in problem areas to assess and manage salinity and sodicity, and getting something to grow there, whether it’s perennial grass mixes or cover crops, to reduce erosion and the loss of top soil.