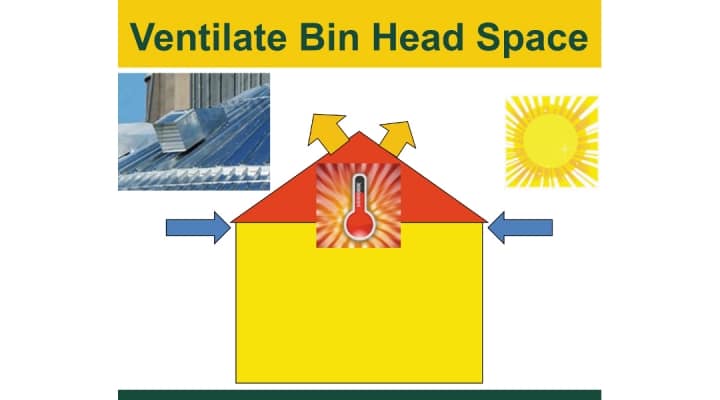 Ventilate the top of the bin to remove the solar heat gain that warms the grain. (Courtesy Photo)

“The goal for summer storage should be to keep the grain as cool as possible to extend the storage life and limit insect activity,” says Ken Hellevang, North Dakota State University Extension agricultural engineer.

Insect reproduction is reduced at temperatures below about 60 F.

Hellevang recommends ventilating the top of the bin to remove the solar heat gain that warms the grain. Provide air inlets near the bin roof eave and an outlet near the peak to exhaust the hot air at the top of the bin. It’s much like venting an attic; the heated air rises and is exhausted at the peak.

A ventilation fan to exhaust the hot air is another option. Hot air under the bin roof will heat several feet of grain at the top of the bin to temperatures conducive to mold growth and insect infestations.

Cover the fan when it is not operating to prevent warm air from blowing into the bin and heating the stored grain. The wind and a natural chimney effect will push warm air through the grain. If the wind blows primarily during the daytime, the grain will be warmed to the daily maximum temperature.

Common temperature cable locations are near the middle and a few feet from the south wall of a bin.

Mold growth will occur at summer temperatures if the grain exceeds the recommended moisture content. The allowable storage time for 15% moisture corn, for example, is only about four months at 70 degrees and two months at 80 degrees.

Controlling grain temperature is more important for low-quality grain. Low test weight, immature grain with damaged kernels has a shorter allowable storage life, so it should be a percentage point drier than good-quality grain.

Checking the grain moisture content is important because moisture measurements at harvest may have been in error due to moisture gradients in the kernel, grain temperature and other factors. In addition, the moisture may have changed while the grain was in storage due to moisture migration or moisture entering the bin.

Stored grain should be monitored closely to detect any storage problems early. Check stored grain at least every two weeks. While checking on the grain, measure and record the grain temperature and moisture content. Rising grain temperature may indicate insect or mold problems. Insect infestations can increase from being barely noticeable to major infestations in three to four weeks when the grain is warm.

“Grain temperature cables are a wonderful tool, but do not rely on them to replace inspecting for insects or crusting and detecting odors or other indicators of storage problems,” Hellevang says.

Make sure everyone, including family and employees, working around stored grain understands the hazards and proper safety procedures.

“Too many people ignore safety practices and suffer severe injury or death while working around grain,” Hellevang says.

Never enter a bin while unloading grain or to break up a grain bridge or chunks that may plug grain flow. Flowing grain will pull you into the grain mass, burying you within seconds. Use the “lock-out/tag-out” procedures to assure equipment will not start before entering the bin.

To determine if the grain is bridged after unloading has started, look for a funnel shape on the surface of the grain mass. If the grain surface appears undisturbed, the grain has bridged and a cavity has formed under the surface. Stay outside the bin and use a pole or other object to break the bridge loose.

If the grain flow stops when you’re removing it from the bin, a chunk of spoiled grain probably is blocking the flow. Entering the bin to break up the blockage will expose you to being buried in grain and tangled in the auger.

Never enter a grain bin alone. Have at least two people at the bin to assist in case of problems. Use a safety harness and rope that prevents you from descending rapidly more than a couple of feet when entering a bin.

“Take time to think of all options before entering a bin,” Hellevang advises.

For more articles out of North Dakota, click here.