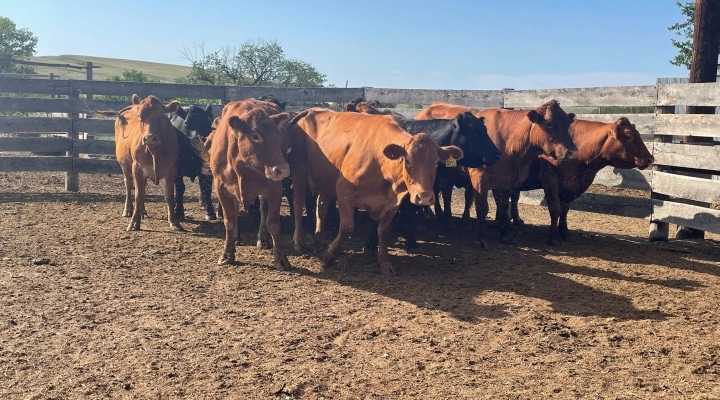 FARGO, N.D. — While the blizzards that struck North Dakota with a vengeance are behind us, the impacts may be far-reaching for many North Dakota ranchers. Calf death losses are only part of the picture, because ranchers are now faced with potentially large numbers of cows that will not be raising a calf this year. In addition, many of these cows may be in less-than-ideal condition due to poor-quality feeds and feed shortages due to one or more years of drought.

“First-calf heifers that lost calves are one group that may be of particular concern due to the costs associated with heifer development and the fact that there will be no income this year to offset those costs,” says Karl Hoppe, North Dakota State University (NDSU) Extension livestock systems specialist based at the Carrington Research Extension Center.

“In many cases, ranchers have already culled deeply due to drought, and it may be necessary to retain dry heifers through the year to maintain herd size,” says Hoppe. “If the heifer lost her calf through no fault of her own, it may be worthwhile to keep her if feed resources and finances allow. Young cows have better potential to cover the costs of maintaining and rebreeding.”

“If heifers are thin, they should recover body condition rapidly provided that rations are adequate to support growth since the lactation demand has been removed,” Hoppe adds. “The goal is to have heifers in a body condition score of six at breeding. A high percentage of these heifers should breed during the first heat cycle.”

First-calf heifers that lost a calf also can be marketed as culls. However, the possibility of discounted prices due to old bone (advanced maturity) or heiferettes occurs with more days on feed. Pregnancy can hasten bone maturity. More days on finishing feed will inherently lead to older age at harvest and possible carcass discounts.

“For mature cows that lost calves, ranchers should evaluate the potential for future income versus cost of production,” says Janna Block, NDSU Extension livestock systems specialist based at the Hettinger Research Extension Center. “Culling criteria include below average production records, poor feet and/or udders, structural issues, bad teeth and disposition problems. Projected market prices for calves and replacements also should be considered to determine whether an individual ranch can afford to retain cows that will not provide any income until 2023.”

Block adds that availability of summer pasture and hay for next winter also are considerations. Although much-needed moisture has been received in many areas of the state, it will be important to continue to receive normal rainfall through June to achieve normal forage production this year. If pastures were grazed hard last year, there could be delays in grass development and growth this spring. Limited pasture and reduced hay production this year could force ranchers to cull more deeply than planned.

The cull cow market is typically better in the spring or early summer, before the traditional low in the fall. If cows are thin and feed supplies are not limited, ranchers may benefit by feeding cull cows to improve the marketing classification and increase value. Thin cows have the potential for rapid weight gain through compensatory gain. However, feed costs, labor and facilities must be considered. Cows that are unsound or injured are not fit for traditional marketing channels. If cows have been treated with antibiotics, it is important to observe withdrawal periods prior to harvest, advises Block.

Because losses both during and after the blizzard can represent significant financial losses, it is very important to visit with lenders about the best strategy given operating costs, cash flow and outstanding debt.

“Ranchers also may be concerned about mature cows with nursing calves that may be in less than ideal condition due to stress or inadequate rations,” says Zachary Carlson, NDSU Extension beef specialist. “Adequate body condition going into breeding season is one of the most critical factors determining a successful breed-back. Extreme cold, wet, muddy conditions are a perfect recipe for nursing cows to lose body condition.”

Mature cows should be in a body condition score of between five and six at calving. This will ensure they have enough energy reserves to last until pasture turnout and meet the energy requirements for lactation. It can be difficult for cows nursing a calf to gain weight prior to breeding. In order to maintain a calving cycle of 365 days the cow must become pregnant 80 to 85 days after calving. Mature cows in a body condition score of four or lower at calving are at risk for delayed return to estrous and failure to rebreed, says Carlson.

Carlson adds, although feed prices are high right now, strategic supplementation after calving for cows with a body condition score of four or less can prevent reproductive failure in your cowherd.

Lush spring pastures often lack adequate energy for cows to gain weight while nursing a calf. It may be necessary to continue supplementation of thin cows after pasture turnout to help those cows gain body weight going into the breeding season.

Factors that will influence cow retention and/or marketing decisions will include financial resources, cow age and production records, labor and time constraints, market conditions and feed availability. These decisions are remarkably complex, and the best option may vary considerably from one ranch to the next, states the NDSU Extension specialists. For additional information, contact your county NDSU Extension agent.