Home » NCTA is a jewel in Nebraska agriculture
education 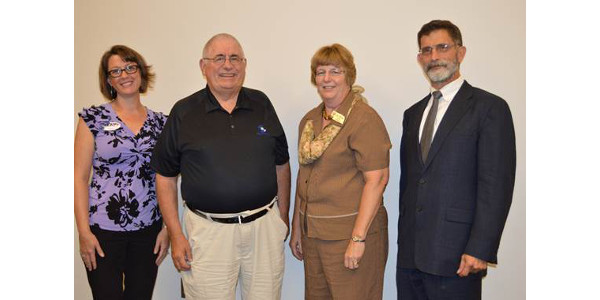 Tim Anderson of Holdrege, second from left, public relations advisor with the Central Nebraska Public Power and Irrigation District is chairman of the South Platte United Chambers of Commerce and Advisory Council member to Dean Ron Rosati at the Nebraska College of Technical Agriculture. He led a SPUCC meeting at NCTA last year with Dena Beck of Minden, Kelly Gewecke of Kearney, and Dean Rosati. (Crawford/NCTA News Photo)

CURTIS, Neb. — This news column was submitted by NCTA Advisory Committee member Tim Anderson of Holdrege. His views were printed on July 8 in the Kearney Hub and reprinted with permission as an NCTA Dean’s Column this week in area news media.

Career development in educational programs supporting production agriculture, agribusiness and technical trades is a high priority throughout Nebraska where a statewide college has been recognized for its affordable, high quality programs.

The Nebraska College of Technical Agriculture (NCTA) at Curtis is one of those jewels in the University of Nebraska system, one gaining notoriety for expanded programs in welding, irrigation technology, precision agriculture, agribusiness management, veterinary science, animal science and experiential learning.

I have enjoyed serving on the NCTA Dean’s Advisory Council for 16 years, witnessing tremendous expansion in programs and opportunities.  Also, I have had a vested interest as a tuition-providing parent of two children who attended NCTA.

Transfer options to four-year institutions have never been better with University of Nebraska partner, the College of Agricultural Sciences and Natural Resources (CASNR) at UNL.

Dr. Doug Smith, chair of the Animal Science and Agricultural Education Division, reports a record number of NCTA’s May graduates (16) are planning to obtain four-year degrees, with 13 of them starting classes this fall through CASNR.  There are two UNL-bound students in veterinary medicine or technology, and three each in agronomy, animal science, agribusiness and agricultural education.

Additionally, NCTA and CASNR recently announced the Bachelor of Applied Science program wherein NCTA graduates can take online classes through CASNR with oversight by NCTA, either on campus or by commuting to Curtis.  This BAS initiative allows students to work at farms, ranches or in agricultural careers in central or western Nebraska without setting foot in Lincoln.  What an outstanding opportunity!

Certified technicians are graduating from NCTA with majors in veterinary technology, irrigation technology and welding.  As a state with the greatest number of center pivot irrigation manufacturers and largest number of irrigated acres, Nebraska’s industries have strong demand for a trained workforce in electricity, welding and agricultural equipment maintenance and repairs.

NCTA launched irrigation technician training in 2013.  By 2016, the college had partnered with several agricultural cooperatives and industries to develop an agricultural career track in Nebraska high schools to include classes in diversified agriculture and agricultural chemical applications.

The first two graduates of the dual-credit program at York High School this May earned NCTA agricultural certificates in agricultural chemical applications.  One student will enter NCTA in August with one year of college credits to his name.

Dr. Brad Ramsdale, agronomy professor, has been teaching students in agronomy and crop sciences for eight years, and established an award-winning crops judging team which repeated as national champion again in 2017.

Ramsdale recently completed a two-week crops/agronomy summer program for honor students.  With Educational Service Unit #11, Ramsdale guided a group of students with classes in Holdrege and included a two-day camp at NCTA for its agronomy resources on campus.

Day camps and dual credit programs are among many developments at NCTA in the past five years.  Expanded programs include precision agriculture courses taught by Dr. Ramsdale, along with practical crop management courses in which students form teams for group management of crops at the NCTA farm laboratory which is located immediately adjacent north of campus.

Additionally, the agricultural equipment program was reinvigorated at NCTA in 2013 and now includes the irrigation technology partnership with Reinke Manufacturing, along with a welding program that has produced its first student to be certified by the American Welding Society.

Instructor Dan Stehlik is an alumnus of the college, then known as the University of Nebraska School of Technical Agriculture, and after teaching in Kansas agricultural education programs for 19 years, he was recruited to return to his alma mater for its agricultural equipment, welding and irrigation technician programs.

Alumni at the college say they are pleased to see the welding program expand, particularly with high demand for welding technicians.  Production enterprises are seeking well-rounded employees with a diversity of skills in crops, livestock, machinery or equipment maintenance and business know-how.

The Central Nebraska Public Power and Irrigation District has partnered with NCTA in several annual forums, including regular tours of its hydroelectric-irrigation project and focusing on water management through the Nebraska Water Balance Alliance.

A highlight for NWBA members has been the opportunity to mentor and interact with NCTA students to these annual forums which draw irrigators, farm managers, educators, vendors and the public to the Nebraska Agriculture Industry Education Center on campus.

Later this fall, the Nebraska Legislature’s Natural Resources Committee is slated to conduct a public hearing at NCTA.  Frontier County is one of the counties represented by Committee Chairman Dan Hughes of Venango within his legislative district 44.

My involvement with UNSTA and NCTA goes back to the days of advocacy on behalf of Nebraska agriculture and the South Platte United Chambers of Commerce which has continually voiced strong support for the college.

This fall, the tuition rate at NCTA is $127.50 per credit hour for all students, regardless of residency.  This is another favorable update to NCTA’s affordability and access.

I look forward to seeing what’s in store next for the “hidden gem” of a college in Curtis.

Sorghum Board to meet July 27