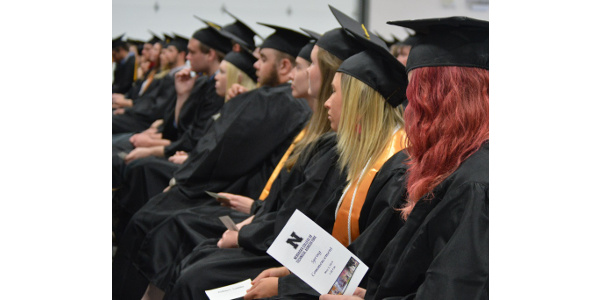 CURTIS, Neb. — Graduates of the NCTA Class of 2019 were urged to find their passion and be a “problem solver” in their career to achieve success.

Nearly 75 graduates, some as double academic majors at the Nebraska College of Technical Agriculture, received diplomas before a packed gymnasium on May 2 at the Curtis Memorial Community Center.

Joan Ruskamp, a 1980 alumnus from Dodge, Nebraska, shared experiences from her college years in Curtis, making a lifelong friend with Judy Derr of Kearney, as they two arrived at college not knowing anyone else on campus.

“Stay connected with the friends you make here,” motioning in the audience to Derr who was seated with Steve Ruskamp, also an NCTA alumnus in production agriculture.

“The friends you make here can, and will, last a lifetime if you choose to make it so,” said Ruskamp, the keynote speaker.

Joan and Steve Ruskamp operate a diversified farm and feedlot enterprise at Ruskamp land in Dodge, County, west of Fremont where Joan Wieczorek took her first job in a veterinary clinic.

“I became a veterinary technician to solve a problem,” the now-mother of five adult children explained. “I wanted to help sick animals to get better.

“Each of one you is called to solve a problem. In fact, if you aim to solve problems, this will lead to success in your personal and professional life,” Joan Ruskamp added.

Many of the graduates attended two or three years at NCTA which enabled double majors in academic areas such as agribusiness management and animal science, or agronomy and agribusiness.

Shayla Woracek of Maxwell is class valedictorian and Morgan Curran of Arapahoe is salutatorian.

A color guard of Curtis American Legion Post #95 presented the colors at the opening while Kaylee Hostler of Central City sang the national anthem.