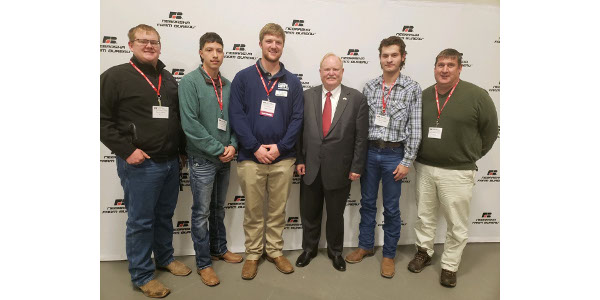 KEARNEY, Neb. — Four members of Collegiate Farm Bureau from the Nebraska College of Technical Agriculture in Curtis got a glimpse of member advocacy and policy development at a state convention in Kearney this week.

“This was my first time experiencing this great event,” freshman Jacob Jenkins of Mitchell said about the Nebraska Farm Bureau Federation’s annual conference.

“I was glad to hear all the news of post-flooding reports and the stories of how Farm Bureau’s disaster fund helped out so many families that were affected by the storms last spring,” he said. NCTA campus fundraisers helped in the disaster response.

“It’s also nice to see how, or what, the organization and our membership does for us as farmers in the State Capitol,” Jenkins added.

“This heightens awareness of issues which are of concern to agricultural production, rural areas and farm ownership, for example,” said Ramsdale, chair of NCTA’s agronomy and ag mechanics division.

“It’s also helpful for these students who may be future agricultural leaders to interact with other young people and producers in the industry,” he said.

Club president Clade Anderson of Otis, Kansas, is a sophomore majoring in agronomy at NCTA. He is one of two students representing Nebraska’s collegiate clubs as a voting delegate in the business sessions.

Collegiate chapters are located at Curtis, Chadron, Norfolk and Lincoln.

Anderson also serves on the Young Farmer-Rancher state board which hosts the annual YF&R Discussion Meet at each convention, and is preparing the for YF&R Conference which will be Jan. 31-Feb. 1, 2020 in Kearney.

Jenkins and Anderson were joined by classmates Gilberto Herrera of Lexington and Tucker Hodsden of Lyman.

Ramsdale also encourages Aggie students from the club to participate in an annual legislative visit to the Nebraska Unicameral next spring. There, they meet with state senators and observe floor debate at the State Capitol.