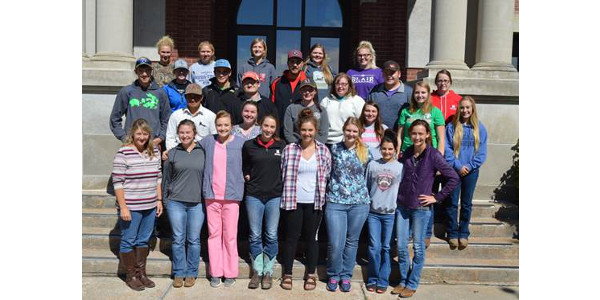 CURTIS, Neb. — Students standing on the “capitol steps” in a group photo taken this fall at the Nebraska College of Technical Agriculture are student leaders.

With the pillars of Ag Hall as the backdrop for the photo, the NCTA Student Senate represents Aggie student clubs, organizations and collegiate teams, and a campus population of 250 fulltime students.

“I think Student Senate is a really great place for all of the groups to come together on campus,” said President Payton Peterson of Holdrege, a sophomore majoring in veterinary technology. “A place where everybody’s voice is heard.”

Leaders meet bimonthly on Tuesday noon hours at the historic Ag Hall, the first building to open in 1913 for the new residential high school, the Nebraska School of Agriculture.

Fast forward to 2017, academic quality and experiential learning are still hallmarks for the college, affiliated with the University of Nebraska system.

“Leadership opportunities and interaction with students across campus is part of our shared governance philosophy at NCTA,” says McConville, who was an agribusiness professor. “I appreciate the maturity and campus leadership of our student senators.”

Each group selects two representatives to serve on Student Senate, Romeo said. Generally, they are one freshman and one sophomore, or might be the club president or treasurer.

Student Senate supports community service projects such as helping with the Curtis Hometown Christmas next week. Or, they organize social and fundraising events such as a community chili cook-off planned for January 25 at the NCTA Student Union.
Senators are responsible for distributing student funds to the various groups for operating monies through the Student Union Resource Fund (SURF) process, said Romeo, who oversees the process through her position with the NCTA Business Office.

Policy input and advising on campus initiatives is also key, said Peterson. For example, last year, students noted a need for improved lighting along a walkway to the Veterinary Technology Complex.

Students work early morning hours and shifts at night in caring for Vet Tech animals at the college.

“The deer are very domesticated on campus and once I had a little run-in with a deer right there on the path,” Peterson chuckled. “So we got more light along there.”

As president, Peterson also serves on several advisory groups such as the Statewide Advisory Council and the NCTA Diversity Committee. “We take student concerns to the Deans who are very responsive, and we also have student input in many initiatives on campus.”