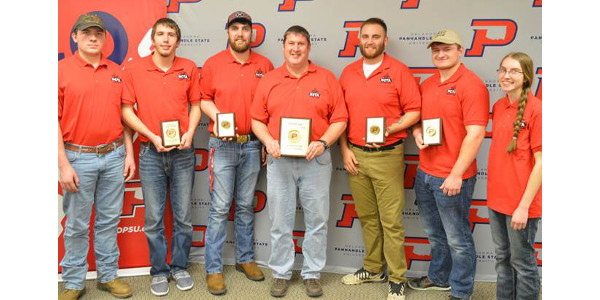 CURTIS, Neb. — The Crops Judging Team from the Nebraska College of Technical Agriculture at Curtis made a Saturday sweep in their opening contest for the year.

“OPSU hosted an excellent contest that really challenged the students,” Ramsdale noted. “I am very proud of the student’s performance and I know they were very excited for the first competition of the year.”

Dalon Koubek of North Platte led the team with Will Kusant of Comstock second, and Nate Montanez of Grand Island and Lee Jespersen of Hemingford, tied for third place.

The experienced crops team members at NCTA are three agronomy students and Jespersen who majors in diversified agriculture.

The NCTA team was among five 2-year and eight 4-year colleges vying for top honors in the contest at Goodwell, Oklahoma.

In their first try at the daylong crops judging events with written exams, plant and seed identification, and a lab practical, two of NCTA’s freshmen students also got a taste of the collegiate competition.

Catherine Ljunggren, who is a diversified agriculture major from Harvard and Jacob Vallery, an agronomy major from Plattsmouth, participated individually. They will be eligible for awards in their second year of competition.

“The first contest can be a eye-opening experience for the first-year students. All the students have been working hard and they always show great progress in their knowledge from one contest to the next,” Ramsdale added.

Crops team classes meet three days per week while studying plants, pests, weeds and the technical aspects of crop production and management. Crops judging events are based on the Certified Crop Advisor program of the American Society of Agronomy.

The NCTA Aggies are champions from a national contest in 2017 and will be defending their title in April in Norfolk, Nebraska, at the North American Colleges of Teachers and Agriculture conference.

The next competition for the NCTA Aggies is March 9 at Kansas State University.

Meat is meat, not a science project