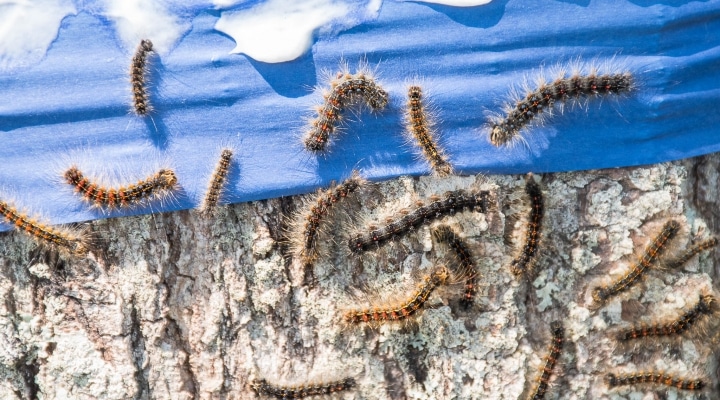 RALEIGH, N.C. — The N.C. Department of Agriculture and Consumer Services will conduct treatments for gypsy moth infestations in several areas across North Carolina beginning June 4 and continuing through June 20.

“A total of seven blocks and 18,559 acres will be treated,” said Allison Ballantyne, NCDA&CS gypsy moth program manager. “We plan to start in Franklin County and will treat periodically heading west. We plan to end in Watauga County mid-June, adding or subtracting a few days to cover possible weather delays.”
The areas to be treated include:

Prior to normal gypsy moth mating periods, aircraft will disperse SPLAT Gypsy Moth-Organic, infused with the naturally occurring gypsy moth pheromone.
The presence of the pheromone makes male gypsy moths unable to follow the natural pheromone scent trails released by the females, decreasing mating success and reducing the gypsy moth population. The pheromone is not harmful to humans, animals or plants and it will not affect other insect species, Ballantyne said.

Gypsy moths feed on the leaves of more than 300 different species of trees and shrubs, predominantly oaks and hardwoods. When areas become heavily infested, trees may be completely stripped of foliage, leaving them susceptible to attacks from other pests. Severe infestations often lead to tree death. Gypsy moth caterpillars can also pose public health concerns for people with respiratory problems, as their hairs and droppings may cause severe allergic reactions.

Public hearings were held in February to discuss these infestations and receive input from residents about treatment options.

For more information, including maps and a description of the proposed treatment area, go to www.ncagr.com/gypsymoth or contact NCDA&CS at 800-206-9333. More immediate updates, including spray start dates, will be posted on Twitter at www.twitter.com/NCAgriculture.

Start your very own victory garden