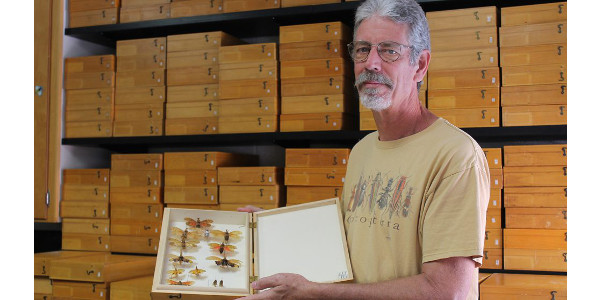 RALEIGH — When is a gift of 60,000+ insects a good thing? When it becomes part of NC State’s Insect Museum, a collection of more than 1.5 million specimens that serves as a research and teaching resource for both scientists and students.

Bob Blinn, the museum’s collection manager, said it’s one of the largest and most significant gifts that the museum has received since he started working there in 1987.

The collection, created by the late Jose A. Ramos, contains more than 60,000 specimens of insects belonging to the suborder Auchenorrhyncha (Hemiptera) — cicadas, leafhoppers, planthoppers, spittlebugs, and treehoppers.

Ramos, who was an NC State alumnus and biology professor at the University of Puerto Rico at Mayaguez, collected the insects from the Caribbean Islands and from Central and South America from the 1930s to 1970s.

“Dr. Ramos was regarded as the pre-eminent expert on Caribbean Auchenorrhyncha,” Blinn said. “The Auchenorrhyncha … is one of the strongest taxonomic groups in the NC State University Insect Museum, for which we are known internationally.”

Ramos earned his master’s degree from NC State in 1945 and his Ph.D. in 1956. He studied under the direction of distinguished entomologist Z.P. Metcalf, who also was an Auchenorrhyncha expert. Ramos’ son, Dr. Stuart Ramos, donated the collection to the university.

The Insect Museum is part of CALS’ Department of Entomology and Plant Pathology. Students and scientists use the collection to identify specimens, to understand more about species distributions through time, to learn insect taxonomy and more.