Home » NC State goes all out to support hemp growers 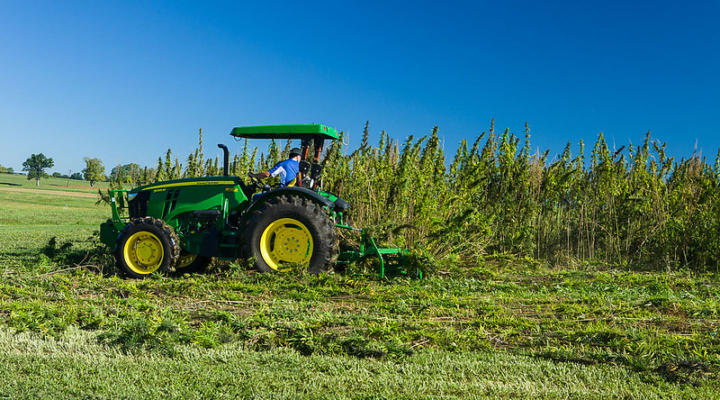 Since 2017, when what amounted to a national ban on hemp production was lifted, NC State Extension and its research partners have worked closely with farmers. Together, they’ve been figuring out how to sustainably and profitably grow the crop under the state’s environmental conditions. Shifting state and national regulations and developing markets present additional challenges. (photo by UK College of Agriculture, Food & Environment, creative commons/flickr.com)

RALEIGH, N.C. — A stubborn love of the land has kept a small family farm in Orange County going for over 250 years. Lynne and Grace Holtkamp are determined to find new ways to sustain that family tradition. Their Merry Hill Hemp farm is among a growing number of North Carolina farms licensed to give hemp production a try.

Since 2017, when what amounted to a national ban on hemp production was lifted, NC State Extension and its research partners have worked closely with farmers. Together, they’ve been figuring out how to sustainably and profitably grow the crop under the state’s environmental conditions. Shifting state and national regulations and developing markets present additional challenges.

Hemp was grown in North Carolina from the 18th to the early 20th centuries as a source of fiber and oil. National regulations for marijuana curtailed the industry. That’s because, without laboratory testing, you can’t tell hemp from marijuana. The two come from the same plant species, Cannabis sativa. The only difference: compared to marijuana, hemp contains only minuscule levels of the psychoactive substance THC. According to federal law, hemp has a THC concentration of 0.3 or less on a dry weight basis.

Profit Potential is High, But …
Several factors have stoked renewed interest in hemp production and processing. Because prices for traditional commodities like corn, wheat, soybeans and tobacco have tumbled in recent years, farmers have been searching for alternative crops.

Along with her daughter, Grace, Lynne Holtkamp believes hemp could fit that bill, especially when it’s grown for CBD, or cannabidiol. Anecdotal evidence suggests that CBD from the plant’s flowers can promote sleep, ease pain, calm anxiety and help with other health-related conditions. The market for CBD products is booming.

But as farmers have secured licenses under a statewide hemp pilot project, they face some steep challenges. The steepest of all has been a knowledge void. No one – not even agricultural agents – had much research-based knowledge about how to produce a successful hemp crop here.

In the first year, that showed.

As Orange County Agricultural Agent Mart Bumgarner says, “We didn’t know what we didn’t know. We got the crop in the ground late, because there were issues getting seeds. Then we also had very low soil fertility, a lot of disease problems and plants that just didn’t come up – we had planted them too deep.”

Still, Bumgarner emphasizes that the first crop was not a failure.

“We didn’t know what we were getting into, so just the fact that we got the crop in the ground was a success,” he says. “The second year, 2018, we confirmed what we thought we learned the first year, and the crop did much better. And this third year is looking even better than that.”

Hemp Production is Risky Business
Bumgarner and others integral to NC State Extension’s research and educational programs encourage aspiring hemp farmers to approach the crop with caution – and without the expectation that they’ll get rich quick.

“It’s a high-risk endeavor,” the agent says. First, there are risks common to most agricultural crops – things like weather, disease, insects and weeds.

“And, oh, by the way, the female transplants needed to grow the crop for CBDs are expensive,” Bumgarner says, “and there are no pesticides labeled for use on the crop.”

Then there’s the fact that if thieves rely on sight alone, they – and even law enforcement officers – can easily mistake hemp for marijuana.

Another confounding factor is that THC levels can vary, even in varieties developed to produce hemp rather than marijuana. If hemp samples have a THC that’s too high, farmers have the option to retest. But if the second test comes back too high, law enforcement has the right to destroy the grower’s entire field.

Given such high stakes, the industrial hemp program manager with the North Carolina Department of Agriculture and Consumer Services (NCDA&CS) says it’s hard to say whether the hemp industry will thrive.

“If the numbers we have heard are realistic and the market stabilizes at that price point, then it will be potentially very lucrative for growers that can grow it well,” says Paul Adams III. “If the price goes down and the market gets more difficult, then it may not remain that way.

“The short answer: Nobody knows.”

Kentucky and Colorado started their hemp programs before North Carolina did. But neither has the nearly ready-made infrastructure, history and knowledge that the Tar Heel State farmers have had with tobacco, a crop that’s somewhat similar to hemp.

Keith Edmisten notes that tobacco growers can adjust their existing production systems – greenhouses, drying barns and transplanting equipment – for hemp. They also have access to labor and to the housing that farmworkers need at harvest time.

“Whether the excitement over CBDs is warranted or not, I think there’s room for growth in North Carolina,” Edmisten. “It fits our tobacco growers very well – almost eerily well.”

Facts to Counter What’s Been Called ‘CBD Madness
From the start of the state’s pilot hemp program in 2017, Extension specialists and agents have pushed to provide more and better information to North Carolina farmers.

As Jeanine Davis, an NC State Extension specialist and associate professor of horticultural science, points out, “There’s lots of information available on the web, but so much of that is bad information.”

To counter that misinformation, Davis, Edmisten and other Extension specialists from five NC State departments have developed a robust web portal full of reliable information about hemp production, marketing and legal issues. A guide to hemp contracts is among the portal’s content.

Extension has also shared the latest research findings related to hemp through field days, presentations, news stories and one-on-one farm visits and phone calls. The range of topics has been broad and deep: from planting dates and budgeting to harvest and marketing considerations.

In addition, Extension educators have incorporated hemp education into other local programs. Earlier this year, for example, close to 30 participants in Extension’s Executive Farm Management Program received training from NCDA&CS officials and a local hemp grower.

Recognizing the growing interest in hemp, Marne Coit, a faculty member in the Department of  Agricultural and Resource Economics, developed a course called the Business and Law of Industrial Hemp. She co-taught the intensive, three-week course with crop and soil sciences specialist Angela Post. It focused on laws and regulations affecting the hemp industry. Participants visited farms, testing laboratories and related local businesses.

Coit, an expert in agricultural law, also developed an issue of the NC State Economist (PDF) focused on legal issues related to hemp and regularly updates the portal with legal and regulatory changes.

Could Hemp Be the Path Forward for This and Other Family Farms?
For lawyer, landowner and farmer Lynne Holtkamp, Extension agent Mart Bumgarner has been a creative force, keeping her apprised of the latest hemp research results, sharing ideas and helping educate the public about the value of agriculture to the local economy.

“Mart has been a tremendous resource,” she says. “I can’t say enough about him, his knowledge, his enthusiasm and his ability to introduce this crop to other people.”

Holtkamp’s path to hemp production began about 10 years ago, when her daughter, Grace, started college. At that time, the farm was producing hay and cattle, but Holtkamp didn’t see that combination as profitable in the long run.

“I had the chance to think more about what am I going to do not only with my time but to pass the farm on to Grace and make it sustainable,” Lynne says. Eight years ago, the two started with an agritourism venture named Merry Hill. The farm, near Mebane, has become a popular outdoor venue for weddings and other events.

Thinking that hemp farming had “a huge potential upside” that would complement the wedding business, Holtkamp became the first person in Orange County and the 51st in the state to receive a license to grow hemp.

Grace Holtkamp takes a creative approach to marketing. Each year, Merry Hill offers pick-your-own-hemp events. The operation was the first of its kind, and it’s proven to be a hit.

“I think it’s really helpful to recognize that when it comes to hemp, it’s not just the product. It’s the experiential aspect of coming out in nature and experiencing, touching and smelling these plants,” Lynne Holtkamp says. “People want to connect with agriculture, and this is one way they can do that.”

“Strengthening that connection is really a core value of what we do here and something that’s rewarding and exciting to be part of,” she says. “We’ve had this farm since 1754, and we don’t want to be the ones that drop it, right? We want to keep it going.”