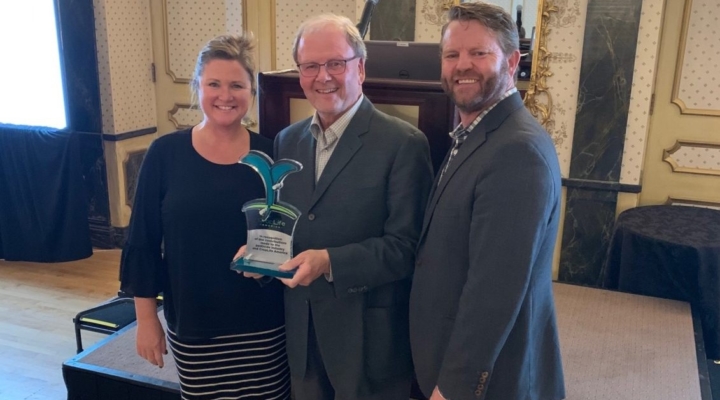 “It is a true honor to be presented with an award named after my long-time friend and ally of wheat Jay Vroom,” stated NAWG CEO Chandler Goule. (National Association of Wheat Growers)

WASHINGTON — On September 28, 2019, NAWG CEO Chandler Goule was named a recipient of the 2019 CropLife America (CLA) Annual Jay Vroom Agricultural Ambassador Award. The award honors a member or an allied organization to CLA who has made a major contribution to public education about pesticides and their contribution to a safe, affordable and sustainable food supply.

“It is a true honor to be presented with an award named after my long-time friend and ally of wheat Jay Vroom,” stated NAWG CEO Chandler Goule. “I really appreciate being nominated for the award and to CropLife for bringing awareness to the importance of educating the public on such complicated issues as pesticides.”

The Jay Vroom Agricultural Ambassador Award is an expression of appreciation from CLA and the industry for outstanding leaders who have provided complete, accurate and unbiased information to society about pesticides. NAWG CEO Chandler Goule was presented the award during CropLife America’s 2019 Annual Meeting.

“Between social media and the ease at which information can be spread today, the wheat industry’s biggest hurdle is those who fearmonger and spread fabrications around how farmers use pesticides on their crops,” continued Goule. “I will continue to work to ensure that NAWG remains a leader in educating congressional staff, the public, and its allies on how crop protectants are vital to ensure safe and affordable food supply.”