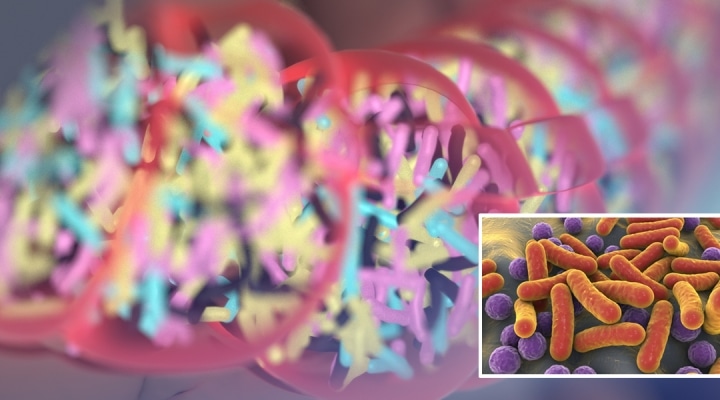 The Big Ideas initiative was first unveiled in 2018 as a challenge to university faculty and staff to develop and submit their “most imaginative, disruptive, and visionary proposals for bold initiatives that will positively transform our community and change the world.” Proposals had to be multidisciplinary and large-scale (valued from $5 million to more than $25 million) to be considered.

One of the 12 Big Ideas selected in 2020 by the university focuses on the human microbiome, a primary area of research for Liping Zhao, the Eveleigh-Fenton Chair of Applied Microbiology, and Maria Gloria Dominguez-Bello, Henry Rutgers Professor of Microbiome and Health, both of whom are SEBS professors in the Department of Biochemistry and Microbiology.

Studying the microbiome (the ecological community of competing and cooperating bacteria, or microbes, in and on the human body) has led to a broader understanding of microbes as no longer simply the cause of disease, but also as promoting health. Both Zhao and Dominguez-Bello have led world-changing research projects that seek to answer the question of how modern lifestyle practices—from the way we eat to the way we treat diseases—impact the human microbiome. Here’s what they’ve discovered recently.

Establishing a healthy gut microbiota may be a new nutritional approach for preventing and managing type 2 diabetes.

Zhao is the lead author in a six-year study, published in Science, which has shown evidence that eating more of the right dietary fibers may rebalance the gut microbiota, or the ecosystem of bacteria in the gastrointestinal tract that helps digest food and is important for overall human health.

In the study, patients with type 2 diabetes were randomized into two groups. The control group received standard patient education and dietary recommendations. The treatment group was given a large amount of many types of dietary fibers while ingesting a similar diet for energy and major nutrients. Both groups took the drug acarbose to help control blood glucose.

This pioneering research, which resulted in the promotion of a select group of gut bacteria using a high-fiber diet, offers hope in the fight to control type 2 diabetes, one of the most common debilitating diseases that develops when the pancreas makes too little insulin—a hormone that helps glucose enter cells for use as energy—or when the body doesn’t use insulin well.

As a follow-up to this groundbreaking study, Zhao and his team are “conducting a clinical trial with nutritional modulation of gut microbiota as an early treatment for COVID-19 and also treating long haulers with GI symptoms.”

Examining the benefits of restoring a C-section baby’s natural exposure to maternal vaginal microbes at birth.

Dominguez-Bello, who is also the director of the New Jersey Institute for Food, Nutrition, and Health, has recently focused her research on how the microbiomes of babies born vaginally can differ from those delivered via cesarean section. She has studied babies in Puerto Rico, New York, Spain, and Chile. Women naturally provide these pioneer colonizers to their babies’ sterile bodies during labor and birth, helping their immune system to develop. But antibiotics and c-sections disturb this passing of microbes and are related to increased risks of obesity, asthma, and metabolic diseases.

“If we can understand what is driving immunity disorders—asthma, allergies, celiac, and others—and which microbes are needed at what age, we can try to restore them,” said Dominguez-Bello of her translational research.

A study published this year, and led by Dominguez-Bello, for the first time finds that the healthy natural bacteria can be restored to babies born by c-section.

Researchers followed 177 babies from four countries over the first year of their lives; 98 were born vaginally and 79 were born by c-section, 30 of whom were swabbed with a maternal vaginal gauze right after birth. Lab analysis showed that the microbiota of the c-section babies swabbed with their mother’s vaginal fluids was close to that of vaginally born babies.

This was the first large observational study to show that restoring a c-section baby’s natural exposure to maternal vaginal microbes at birth normalizes microbiome development during their first year of life. The next step is conducting randomized clinical trials to determine if the microbiota normalization translates into disease protection.