Home / Washington / Natural enemy of invasive, berry-eating fly found in U.S.
A new user experience is coming! We'll be asking you to login to your Morning Ag Clips account March 1st to access these new features.
We can't wait to share them with you! Read more here. 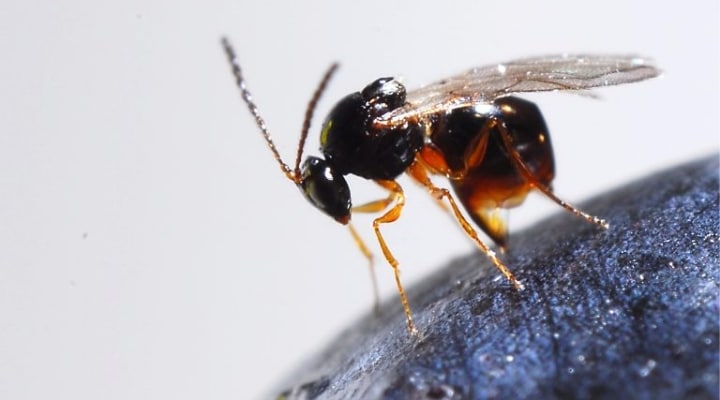 A parasitoid wasp, Ganaspis brasiliensis, laying eggs into the larva of a spotted-wing drosophila on a blueberry. (Photo courtesy of WSU CAHNRS via Kent Daane, UC Riverside).

WENATCHEE, Wash. – A parasitoid wasp that is the natural enemy of a fly known as the spotted-wing drosophila could be a good friend to growers. Washington State University researchers recently confirmed the discovery of the potentially beneficial wasp in the United States for the first time.

The drosophila flies cause major damage to several Washington crops, especially sweet cherries and berries. The wasp, which lays its eggs in the flies, could be a means of controlling their spread.

“This is really a positive step for the cherry and berry industries,” said Elizabeth Beers, a professor in WSU’s Department of Entomology. “Hopefully this speeds up the timeline to get biological control of the spotted-wing drosophila.”

Beers and her team found the parasitoid, called Ganaspis brasiliensis, this September, in a wild blackberry patch less than a mile from the Canadian border near Lynden, Wash. The tiny wasp was found in western British Columbia in 2019. Paul Abram, a Canadian colleague, asked Beers to watch for wasps crossing the border and provided tips on the best places to find them.

Another parasitoid of the drosophila pest, Leptopilina japonica, was also found in British Columbia in 2019 and in Washington state in 2020 by Chris Looney of the Washington State Department of Agriculture. But the new parasitoid which is native to South Korea has a major benefit: specificity.

“The Ganaspis is very host-specific; it really likes to attack spotted-wing drosophila larvae and generally doesn’t bother other species,” said Beers, who is based at WSU’s Tree Fruit Research and Extension Center in Wenatchee.

The invasive drosophila fly hurts fruit because it doesn’t just nibble on the outside—its larvae burrow down into a raspberry or cherry and ruin the entire thing. That’s where the parasitoid comes into play.

“It’s a bit like the movie Alien,” Beers said. “It’s unpleasant to think about in sci-fi movie terms, but really effective for killing spotted-wing drosophila.”

The Ganaspis parasitoids were recently approved by the U.S. Department of Agriculture Animal and Plant Health Inspection Service to be reared and distributed around the U.S. as a biocontrol.

To do that, an entomologist went to the native home of spotted-wing drosophila, found the Ganaspis, and brough back several samples. After significant research in quarantine, it was found to be safe to spread here to fight drosophila.

During that process, the Ganaspis found its own way to North America and is spreading without help. Once an invasive species is found living in a state, the USDA does not regulate it being distributed around that state, making the process easier.

“It’s kind of the best of both worlds,” Beers said. “It’s great that we have a lot of research showing that Ganaspis is very host-specific and safe to spread around. But there are also benefits to it being found here in nature.”

This is the third exotic species that Beers and her lab has found in the last few years. They found a parasitoid of the apple mealy bug, a pest for the apple industry, and the Samurai wasp.

“I never anticipated this, it’s not the main focus of our lab,” Beers said. “We’ve just kind of stumbled across them as part of our research on various pests.”